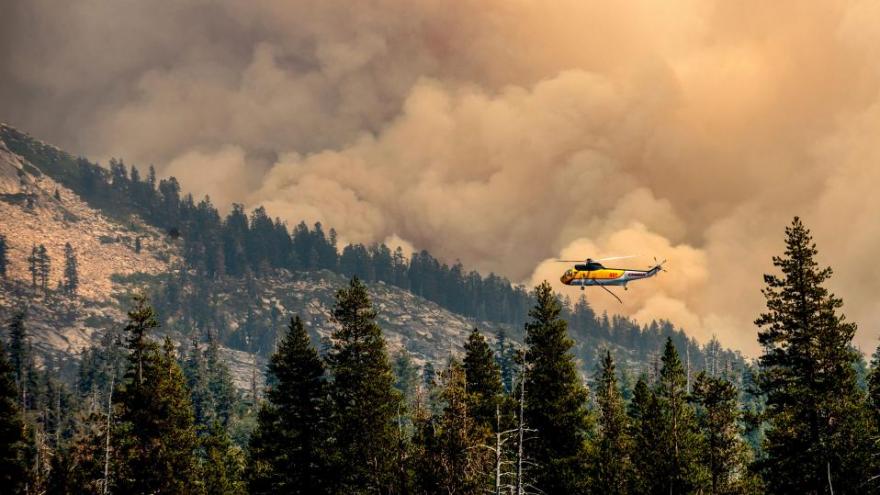 A helicopter flies over Wrights Lake while battling the Caldor Fire in Eldorado National Forest, Calif., on Wednesday, September 1.

(CNN) -- The Caldor Fire, which has threatened the popular tourist spot of Lake Tahoe, came under better control this weekend, and some evacuation orders have been downgraded.

The growth of the fire burning along the California and Nevada border has slowed significantly. In the 24-hour period between Friday night and Saturday night, the fire grew by only 842 acres, according to CNN's analysis of information from Cal Fire. That's a far cry from its explosive start, when the blaze grew to nearly 100,000 acres in its first week.

Firefighter efforts are now focused on the mop-up operation and continuing to strengthen and maintain the containment lines, Cal Fire said, rather than the forceful suppression efforts of the early days of the fire.

As the situation evolves, some of the evacuation orders have been downgraded for the 214,112-acre wildfire, which is now 43% contained, according to Cal Fire. The containment increased by 11 percentage points from a day earlier. The fire is expected to be fully contained by September 27, the agency said Sunday.

On Saturday, officials in Douglas County, Nevada, downgraded their mandatory evacuations to precautionary evacuation warnings and lifted the evacuation warnings that had been in place, according to an announcement posted on the county's website. The move opens the door for some residents to begin returning to their homes.

In parts of El Dorado County, California, the evacuation orders were downgraded, and the evacuation warnings were also lifted, according to a news release from Cal Fire.

In the city of South Lake Tahoe, California, the mandatory evacuation orders did not change. They remain in effect with all the roads closed, the city said on Facebook.

The Caldor Fire is only one of a number of massive fires that have broken out across the American West this summer due to a severe drought in the region.

"Above normal significant fire potential is forecast to continue through September for much of the Northwest, Northern Rockies, and northern portions of the Great Basin and Rocky Mountain Geographic Areas," the National Interagency Fire Center wrote in an outlook report last month.

As of Saturday, more than 14,690 personnel are on the frontlines of 13 active large wildfires, Cal Fire said

Meanwhile, a firefighter assigned to fight the massive Dixie Fire has died due to an illness, the agency said.

The Dixie Fire has been burning in northern California for more than a month and a half. As of Sunday morning, the fire is about 894,000 acres and is 56% contained. The agency previously reported injuries to three first responders fighting the blaze but has not reported any civilian casualties or injuries.

There are 3,820 personnel assigned to that incident, which is burning in five counties and has grown to become the second largest wildfire in California history.