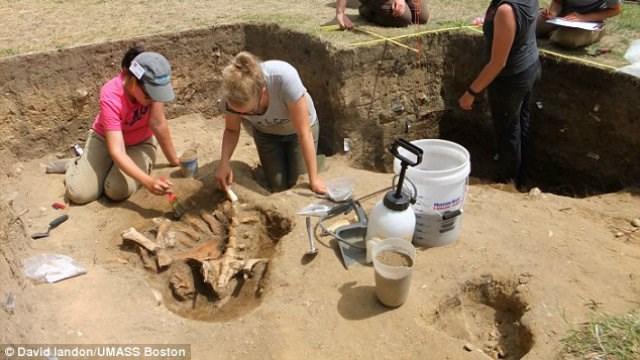 (CNN) -- The discovery of a calf's remains, 17th-century pottery, musket balls and trade beads has led University of Massachusetts Boston researchers to believe they have located the elusive 1620 Plymouth settlement where the Pilgrims celebrated the first Thanksgiving.

The evidence was found at an archaeological site on Burial Hill in Plymouth, which is believed to be the location of the first Pilgrim settlement, according to a report on the university's website. The settlement's exact location has long eluded precise identification.

"While there have been different excavations, it's kind of tricky because [the site] is in the middle of downtown Plymouth. So it makes it hard for archaeologists to excavate and where they're digging is right on the edge of a cemetery," Ness said.

The project is a collaboration of the university's Andrew Fiske Memorial Center for Archaeological Research, the Plimoth Plantation and the Institute for New England Native American Studies at the University of Massachusetts Boston.

David Landon, associate director of the Fiske Center, and his students have spent five weeks every summer since 2013 looking for evidence of the original settlement.

Landon's goal was to find evidence before 2020, the 400th anniversary of the founding of the colony, according to UMass Boston statement.

"While we're digging, we're constantly in the process of trying to interpret what we're finding," Landon said.

"It's about much more than the artifacts -- it's about trying to pin down soil color and trying to understand constructed features that are no longer there."

The researchers could not search for typical building foundations because the structures from the original settlement were not built with bricks, according to the statement.

The Pilgrims used "post and ground construction," a system of vertical wooden posts planted directly into the ground. To find the settlement, the team had to locate holes for wood and dirt, the statement said.

It wasn't until the team found the calf, which was named Constance by the students, that Landon said he felt he had definitely found the settlement.

Native people did not have domestic cattle, according to Landon. He concluded that the calf lived, died and was buried within the walls of the first settlement.

"Oftentimes success in the colony depended on herds of cattle," he said. "It became a centerpiece of the economy. So the calf does connect us to that story."

The team will return next summer to continue its research.