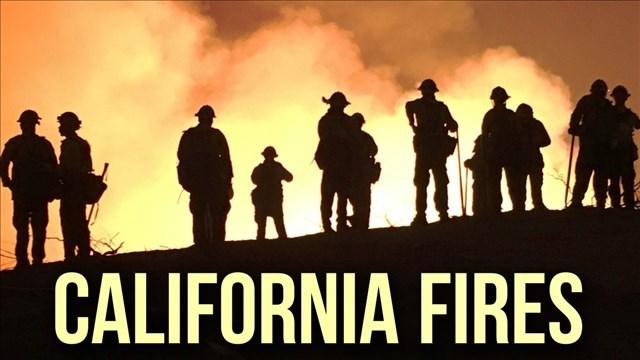 (CNN) -- While the Blue Cut Fire that has been ravaging thousands of acres near Los Angeles is 83% contained, other wildfires are burning up and down the state, including one threatening the historic Hearst Castle, authorities said.

The 24,000-acre Chimney Fire in San Luis Obispo County is burning toward the Hearst estate, a group of mansions on 127 acres, but authorities are hopeful that bulldozed fire lines will protect the former home of newspaper mogul William Randolph Hearst, which operates as a museum.

The fire is 35% contained and has burned 8,000 acres of the castle property, Stephen Hearst, vice president of the Hearst Corp.'s Western properties, told the San Luis Obispo County Tribune.

"Every time they build a break, the fire jumps it," Hearst told the newspaper, adding the estate might lose another 4,000 acres as firefighters ignite backfires to battle the oncoming blaze.

The 165-room castle is midway between Los Angeles and San Francisco, about 250 miles from each. In the estate's heyday, an invitation to visit was coveted by Hollywood and political elite, and it was reputedly visited by celebrities such as Charlie Chaplin, Greta Garbo, Cary Grant, Calvin Coolidge, Howard Hughes and Winston Churchill.

In San Bernardino County, firefighters have pretty well contained the 37,000-acre Blue Cut Fire after it destroyed at least 96 homes and 213 outbuildings.

Among those was the Clyde Ranch near Wrightwood, CNN-affiliate KABC reported. The ranch was founded before the Civil War and reportedly had ties to Wyatt Earp.

The fire also ravaged the Summit Inn, an iconic diner off Route 66. Elvis Presley once visited and left without eating after he noticed the jukebox didn't contain any of his records.

The diner was dedicated to typical roadside fare, except for its ostrich egg omelet.

"It makes me sick in my stomach," said Cecil Stevens, who owned the place for decades. as he looked over its charred remains. "It's awful, 'cause I know every button in that restaurant that was there, every light switch, every pipe."

Veteran fire officials said property loss in the area could have been much worse, but credited early deployment of firefighters and equipment for limiting damage.

More than 1,500 fire personnel were on the scene, along with 178 engines, 12 air tankers and 17 helicopters, according to the InciWeb fire information site.

California authorities continued to lift mandatory evacuation orders after nearly 82,000 people were ordered out of the fire area, KABC reported.

Manuel Vasquez told the television station his parents' house near Phelan was spared but many neighbors' homes were burned. "It's terrible, it changes everything," he said. "Some people might not come back."

California is battling six large fires, according to a state fire map.

The Soberanes Fire near Big Sur in Monterey County is 85,212 acres and 60% contained after destroying at least 57 homes and threatening marijuana gardens, according to the state department of forestry and fire protection.

The Rey Fire near Santa Barbara is nearing 19,000 acres and is 10% contained.

Even the much smaller Clayton Fire, nearly contained at 2,900 acres, took an emotional toll. At Lower Lake, California, Kevin Dean and his neighbors dug through debris and surveyed the destruction.

"All gone," he said to CNN-affiliate KCRA, but he added: "We're not quitters. We'll rebuild. That's what we're going to do. That's exactly what we're gonna do."

The only thing recognizable at one home was a standing charred wall. Nearby a tearful Wes Baker was mourning the loss of his Siamese cat. "She's really old, she's really sweet," he told the TV station. "She sleeps on me, you know?"