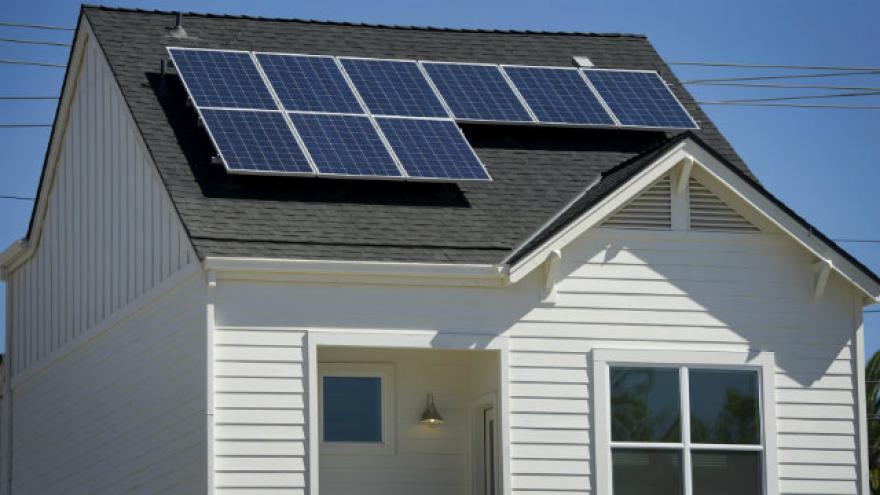 People wanting to buy a new home in California may soon face an additional upfront expense -- solar panels that will reduce energy use. Photo courtesy Bloomberg via Getty Images

By Isabella Gomez and Christina Zdanowicz

(CNN) -- People wanting to buy a new home in California may soon face an additional upfront expense -- solar panels that will reduce energy use.

The panels could become a requirement if the California Energy Commission votes Wednesday to adopt new energy efficiency standards.

The standards will benefit homeowners' wallets and the environment, according to the CEC.

"Homes under the (new) standards will use about 50% less energy than those under the previous 2016 standards," said CEC spokeswoman Amber Beck, "and greenhouse gas emissions would be reduced as if 115,000 cars were taken off the road."

Houses under construction as of January 1, 2020, will be included in the plan. It would make California the first state in the country to require solar panels on homes, according to the CEC.

Some groups, however, are worried about the added expense of installing the panels. The commission calculates that it would cost approximately $9,500 per home.

Adding up the costs

This poses a problem for organizations such as Habitat for Humanity, which aims to provide more affordable housing to people in need.

"As a nonprofit builder who finances all the construction ourselves through private donations, it is, of course, a concern to add any more costs to those," Laine Himmelmann, development director for Habitat for Humanity in Sacramento, told CNN affiliate KCRA.

Still, the CEC believes homeowners will save more than they will spend in the long run.

They calculate that a 30-year mortgage would face an increase of about $40 to average monthly payments, but residents would save $80 dollars on heating, cooling and lighting bills every month.

Leasing options will be available for those who do not wish to invest in a solar system upfront.

"The homeowner pays a small fee to lease the equipment but receives the benefit on their monthly utility bill," Beck told CNN.

If the CEC votes to adopt the new standards, they will go to the California Building Standards Commission for final consideration later this year.

Some California cities, including San Francisco, San Mateo and Lancaster, already have similar ordinances in place.