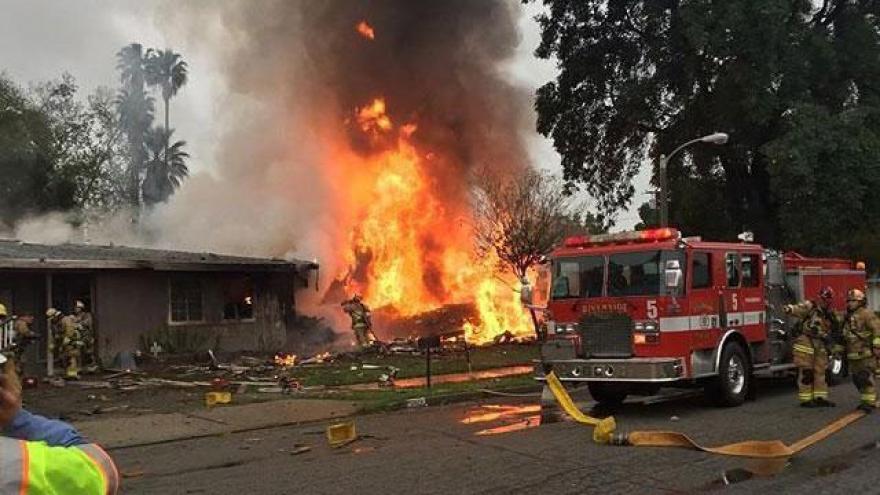 (CNN) -- One of the two women who survived a deadly small plane crash in southern California on Monday was found in the bedroom of a home the plane crashed into, Riverside Fire Department Capt. Tyler Reynolds said Tuesday.

The woman, who was on board the plane when it went down in a neighborhood near Riverside Municipal Airport, suffered third-degree burns to 90% of her body, Reynolds said.

The other survivor was found near the crash scene and aided by residents who assisted firefighters with the rescue, Reynolds said. Both women are in critical condition.

Three others on the plane were killed, fire officials said. The victims include an adult male, an adult female, and a teenage female, Reynolds said. No one on the plane has been identified and officials weren't sure if they were all part of the same family. Officials had said four were killed, but later corrected the number.

Four homes were damaged in the crash, Reynolds said. Two were destroyed by fire, while two others sustained minor smoke and exterior damage.

No one on the ground was hurt, fire officials said, though more than a dozen residents were displaced, according to Riverside City Councilman Mike Soubirous.

Those on board the plane had been in southern California for a cheerleading competition at Disneyland, Riverside Fire Chief Michael Moore said Monday.

"This is supposedly a happy time and then just to have a tragic incident like this, and into one of these Riverside residences, it's really a sad case for us," Moore said.

The National Transportation Safety Board is investigating.

The aircraft had a full tank of fuel, causing the fire to burn. Investigators also want to assess the neighborhood in case of dropped plane parts, as debris scattered in the impact.

Witness Brian Marsh told CNN affiliate KTLA that he saw the plane fall from the sky.

"As soon as it turned, it almost stalled," Marsh said. "It just turned and went straight toward the ground. It looked like they tried to pull out of it, but it was too late."

Traci Zamora, who lives in the neighborhood, heard the crash.

"I was inside the house and it shook our whole house like an earthquake," she told CNN over Facebook. "It is all so surreal."

Another resident, Chloe Hirohata told CNN in an email, "I heard an explosion, witnessed a large plume of smoke coming from the scene and rushed over."