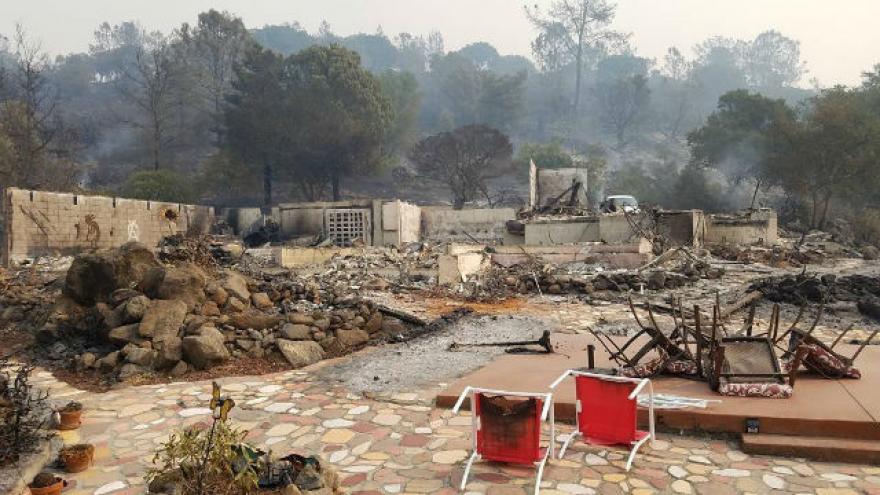 (CNN) -- When the wildfires in Northern California broke out this week, they spread so fast that many residents were caught off guard.

Some told CNN that the smell of smoke or their dogs whimpering were the only warnings they got before the fires tore through their neighborhoods, forcing them to flee their homes in the middle of the night.

Now local emergency management officials and authorities are facing criticism for how they informed residents of the fires -- and how they didn't.

"From what I've heard from (friends and family), no one got an alert," said Sonoma County resident Margaret Curzon, whose parents lost their home to the blaze. "Everyone was blindsided by this."

California counties and agencies used different methods to warn residents of impending danger from the fires, but some residents are saying they weren't effective. Here's a closer look at what was done and what was not.

At a news conference Wednesday, state officials were questioned about why agencies had not used the federal Wireless Emergency Alert system to notify residents of the approaching fires.

You may recognize a Wireless Emergency Alert (WEA) as the screech your cellphone makes when an Amber Alert has been issued in your area.

Local agencies must apply for the authority to issue such alerts, which are sent to participating phone carriers through the Federal Emergency Management Agency's Integrated Public Alert and Warning System (IPAWS). According to the FCC, the WEA system sends alerts that are issued directly by the president, alerts that involve "imminent threats to safety or life" and Amber Alerts.

This system is credited with helping authorities catch Ahmad Khan Rahimi, who is on trial for allegedly setting off bombs in Manhattan's Chelsea neighborhood in September 2016. Three hours after the NYPD, the FBI and the Office of Emergency Management sent an alert to area residents' phones, Rahimi was in police custody.

At the time, New York's police commissioner called the system "the future."

Several state and county-level agencies in California affected by the wildfires have the ability to send the federal alerts as of August, according to FEMA. They include the Governor's Office of Emergency Services (OES) and Sonoma and Mendocino Counties.

Some statewide agencies, like the governor's OES and the California Highway Patrol, also are authorized to use the system.

But Kelly Houston, deputy director for the OES, said the state doesn't send out alerts and warnings.

"From the state level we wouldn't do that," she said. "Alerts and warnings happen on a local level. ... They decide what are the appropriate alerts for their population." Which system is used depends on the county's emergency plan, Houston said.

The California Highway Patrol's ability to use the WEA system "is limited only to Amber Alerts," said Sgt. Robert Nackey, "so the CHP wouldn't have been able to use the early-warning system to put out information regarding fires."

What alerts were used?

Mark Ghilarducci, director of the OES, told reporters Wednesday that "various counties use different ways to push information out to the public."

Those methods could include posting warnings and information on social media or using a reverse 911 call to notify landlines. Some agencies also rely on Nixle, a subscription alert service, but residents must opt in to receive its mobile or email alerts.

Sonoma County Sheriff Robert Giordano said the county -- which is authorized to send WEAs, according to FEMA -- has systems in place to notify residents with landlines, but suggested in a news conference that people sign up for SoCoAlerts, which can send notifications via cell phone, email or text messages. The county also uses Nixle, he said.

"If you don't sign your cellphone up, you don't get that service," Giordano said.

"So the message is, sign up for SoCoAlerts if you live in this county, because then it sends the message to your cell phone just like your house phone," he added. The speed at which the fires spread was also a factor in communications, he said.

Resident: 'Would've been nice to get an alert'

But those methods weren't enough to prepare Curzon or her parents, who didn't even know they existed.

Curzon's parents live in the Coffey Park neighborhood of Santa Rosa. It's the largest city in Sonoma County, where the fires have claimed 17 lives. Her mother and father lost their home in the blaze Monday.

Curzon told CNN her mother woke up around 2 a.m. to the sound of their family dog whimpering. That's when she first became aware of the fire.

Neither Curzon nor her parents received any type of warning or alert ahead of the fire, she said, but she signed up for the county's Nixle alerts Monday morning after her roommate told her about them. "I didn't even know it existed before the fire happened," she said.

Curzon said she was familiar with Amber Alerts issued through the WEA system and found it "pretty disturbing" that Sonoma County had the ability to send out a warning but didn't.

"I mean, they could have sent out an alert to warn people about what was going on," she said. "Maybe they didn't because they didn't realize how quickly the fire was going to spread ... but it would've been nice to get an alert."

Jennifer Larocque, a spokeswoman for Sonoma County, said officials chose not to send out a WEA because it would target too large a geographic area, evacuating residents who weren't in danger and causing gridlock on the roads.

"To keep everyone safe we chose not to use a mass alert that would have reached areas that are not affected by the fire, in turn keeping roads open for emergency vehicles reaching people in need," she said.

Larocque emphasized the "multi-faceted approach" county officials took to notify residents, including alerts through Nixle, SoCoAlerts and the CodeRED mobile alert app, all of which require residents to sign up and opt in.

Scott Alonso, a Sonoma County spokesman, said Friday there were 10,557 residents signed up to receive SoCoAlerts, nearly 8,000 of them in Santa Rosa. That's roughly 2% of the estimated 503,070 people living in Sonoma County in 2016.

But a FEMA spokesperson told CNN Saturday that agencies sending WEAs have "the option of providing geographic coordinates defining the area where the alert is to be targeted."

The IPAWS system passes the message and the preferred geographic target area to cellphone carriers, which can choose which cellular towers send out the WEA to the preferred area.

But, the spokesperson added, this requires the agency to "know the specific location of cell towers, which is not common or easily obtained information," and the targeted area could range from a small area in an urban setting to "tens of miles in rural applications."

"It's something we'll absolutely be looking into as part of our after-action plan," Sonoma County spokeswoman Hannah Euser told CNN Sunday when asked for comment.

But even some residents who were aware of the various alert systems said they fell short of what was necessary to safely warn them about the fires.

Joseph Pader, 28, lives in Soda Canyon near Napa, California. He was signed up for Nixle alerts from the Napa County Sheriff's Office but said he didn't receive a warning until 3 or 4 a.m., at which point, "it was too late to leave."

According to FEMA, Napa County doesn't have any agencies authorized to send a WEA.

It wasn't until hours later that workers from the California Department of Forestry and Fire Protection (Cal Fire) arrived and informed them they would have to leave under a mandatory evacuation notice.

Pader remained behind and helped neighbors pack and evacuate. Around 6 p.m., he watched the fire engulf his home. His family had lived there for 26 years.

"It took about 10 minutes for my whole home to burn down," he said. "It's never going to be the same. I grew up in that home. It's very close to my heart."

Pader supports his local authorities, he said, and believes they were doing the best they could. But he was disappointed with their emergency response this time.

"It could've been handled better," he said. "The resources were very thin, almost nonexistent."

One county sent a WEA

One county affected by the fires did choose to send out a WEA.

Lake County, north of Sonoma, sent an alert out to its approximately 64,000 residents around 2:20 a.m. Monday in response to the Sulphur Fire, according to Lake County Sheriff's Office spokesman Lt. Corey Paulich. Another WEA was sent out Saturday morning.

The fire situation in Lake County is admittedly less severe than in others. As of Saturday, there were only about 2,600 acres burning there.

The county used other methods as well, including Nixle and sending officers door to door. Lake County also uses the CodeRed app, Paulich said, and it has an agreement with FEMA to send WEAs through that app.

Local authorities use a mapping tool, Paulich told CNN, to select which residents in which areas should be alerted and provided with emergency information.

Officials have sent out WEAs in Lake County for weather and even to alert residents if a criminal suspect could be in their area, Paulich said.

When asked what factors authorities take into account to decide whether to send a WEA, Paulich said, "Just the fact that we had folks that were in immediate danger, and wanting to notify them of the situation."

Lake County has no reported deaths as a result of the fire, he said.