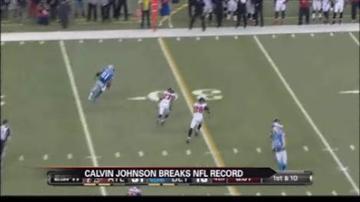 A major record was broken Saturday in the NFL.

He entered last night's game nearly 200 yards behind hall of famer Jerry Rice but late in the 4th quarter, he caught a 26 yard pass from quarterback Matthew Stafford to break the former record set in 1995.

"It's a huge accomplishment to take one of those records from the great Jerry. All  the work we put in this year, you know it's, I guess you could say it's well-deserved," said Johnson.

Calvin Johnson even has a nickname now.  He's known to fans across the league as "Megatron".