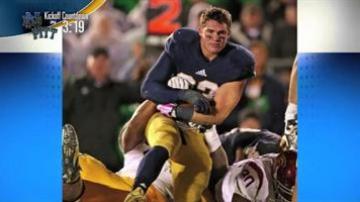 One Notre Dame football player got some unexpected hype in the media recently. Not for his athletic abilities but for his dashing good looks.

Irish running back Cam McDaniel says he was shocked and surprised about all of the media attention surrounding a picture of him that went viral.

A photo of McDaniel appeared on Deadspin.com not long after the Notre Dame-USC game. The picture quickly spread on social media sites and went viral.

The photo even received some attention on ABC's Good Morning America.

We asked McDaniel what he thought about all the attention focused on his looks.

"I consider myself the last individual to be portrayed in the light that I was portrayed in from a media perspective," said McDaniel.