Canadians hope to continue success of Henderson at Blackthorn 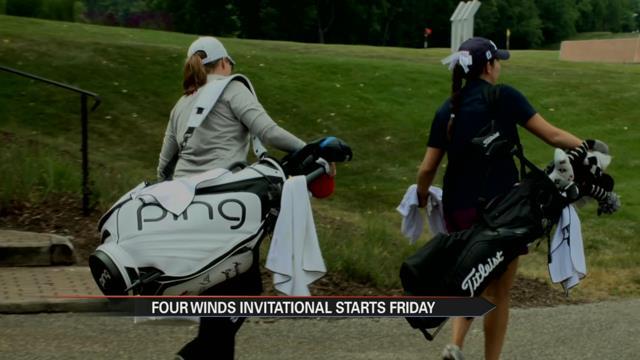 Almost time to tee off at the Four Winds Invitational at Blackthorn Golf Club in South Bend.

Two Canadian golfers have big aspirations but have relied on each other as they try to reach their goals.

“I have played golf my whole life. It’s really cool for Augusta and I, we started on the Canadian National Team,” says Symetra Tour player Brittany Marchand.

“Obviously that would be huge for me, that’s the next step, the LPGA tour,” says James.

“At this level, the mental aspect of golf is the biggest thing. It separates the top players from those who are just doing ok,” says Marchand.

Marchand and James are friends who aren’t afraid to give each other advice.

James won on tour for the first time last year in Florida.

“Surreal. Yeah it was great. It makes you hungry for more though,” says James.

Marchand is a rookie and ranks 44th on the money list and is coming off her best finish of the year in Albany.

Both are excited about blackthorn and the four winds invitational.

“The course looks beautiful. It’s in great shape. It looks like it makes you think – which I like,” says Marchand.

The pros even had a minute to show an amateur how it’s done on the course on the par three 12th hole.

As they do with every hole they play during tournament play they consult their yardage book for distance and for help with club selection.

For Marchand it’s a hybrid on this particular hole.

If you haven’t noticed, they are good.

Marchand gets it 10 feet from the hole.

James. Dancing. Just off the green.

For Marchand and James, it’s just another hole, another tournament, another chance to reach the ultimate goal.