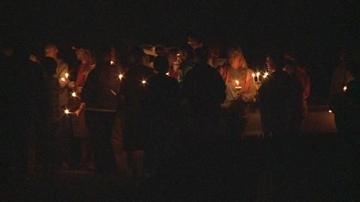 It was a solemn night Wednesday, in the normally quiet community, as the flicker of candles lit the neighborhood.

Family, friends, and co-workers joined the vigil to remember the life of 26-year-old Jessica Starr.

Tears were flowing, as sadness swept over the crowd. They gathered in the driveway in the front of the house that was a crime scene late Monday night, when Elkhart County Sheriff's found Starr's body in the backyard.

Friends told ABC 57 that Starr was a great, kind, and loving person.

Some said they just want justice.

Captain Jim Bradberry, with the Elkhart County Sheriff's Department, said they are not giving out the results from the autopsy performed Wednesday.

"We are still investigating, and we can't release anything," Bradberry said.

He also said no new information is available on the "person of interest" they have had in mind since Tuesday.