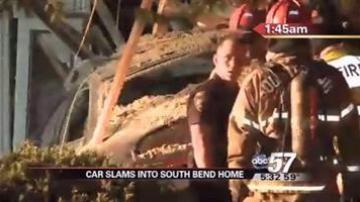 SOUTH BEND, Ind. --  One woman is dead after police say she was hit by a car while sitting in her home.

It happened around 1:30 a.m. on Friday at the intersection of Corby and Twyckenham in South Bend.

Police say a male and female were in the car. The female driver claims she was chased off the road causing her to lose control. Both were taken to the hospital with non-serious injuries.

Officials say the woman who was killed was just sitting on her couch when she was hit. Her body was not recognizable.

Two dogs were reported missing after the crash happened. One has been recovered.

The house is schedule to be demolished at 8 a.m. due to being in unstable condition. The intersection of Twyckenham and Corby is still blocked off.

As of right now police are still investigating the accident and names of the people involved have not been released.

Stay with ABC57 News for the latest updates as they come into the newsroom.