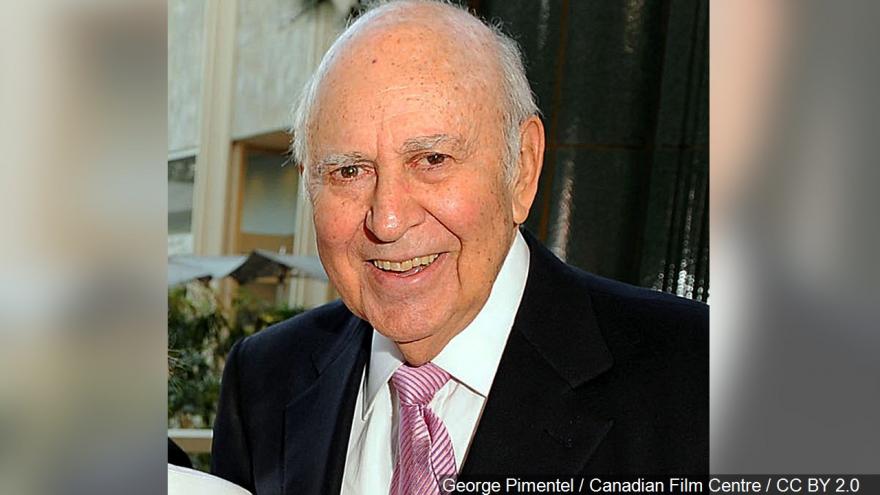 (CNN) -- Carl Reiner, the writer, actor, director and producer whose many decades' worth of credits -- including "The Dick Van Dyke Show" and "The 2000-Year-Old Man" -- showcased a ready wit and a generous spirit, has died, his son, director Rob Reiner, announced in a tweet.

"Last night my dad passed away," Rob Reiner wrote. "As I write this my heart is hurting. He was my guiding light."

His career spanned live television, Broadway, motion pictures, record albums and a variety of guest appearances. He was a performer and writer on the legendary "Your Show of Shows." He created "The Dick Van Dyke Show," one of the great situation comedies in history, which was based on his life as a comedy writer.

So expansive was his reach in Hollywood that tributes flowed in on social media Tuesday from various generations.

"His talent will live on for a long time, but the loss of his kindness and decency leaves a hole in our hearts," Alan Alda wrote.

Reiner's ongoing routine with fellow comedian and director Mel Brooks, "The 2000-Year-Old Man" -- which began in the 1950s -- was immortalized on several comedy albums. The act, about a reporter who interviews a 2000-year-old man about life, is still memorized and repeated by comedians past and present, beloved for its fast-paced humor, absurd twists and obvious camaraderie between the pair.

But unlike Brooks - who was often the center of attention in whatever he was doing -- Reiner preferred to play straight man or work behind the scenes.

He had a hand in many "Dick Van Dyke Show" scripts and occasionally popped up as a supporting character, grouchy TV host Alan Brady. He had a run as a movie director with such films as "Oh, God!" (1977) and "The Jerk" (1979).

Brooks praised him for his comic intelligence.

"The real engine behind ('The 2000-Year-Old man) is Carl, not me. I'm just collecting the fares," he told the A.V. Club. "People should know that he's the most important one in the act."

Reiner believed in spreading the laughs -- even if he was the butt of the joke, he wrote in his memoir, "An Anecdotal Life."

"Inviting people to laugh with you while you are laughing at yourself is a good thing to do," he wrote. "You may be a fool but you're the fool in charge."

How he got his start

Reiner was often the "fool in charge" throughout his career -- though few people would describe him as a fool. More like an innovator.

He was born in the Bronx on March 20, 1922. According to his autobiography, his father was a watchmaker, his mother a homemaker, and young Reiner wanted to be an actor. The shy teenager got a needed push when his older brother suggested joining a Depression-era acting class. By 17, Reiner was working regularly.

"Every week for a year, I did two shows at the Gilmore Theater. I was a very good, solid, serious actor. That's what I wanted to do," he told Moment magazine.

But serious, dramatic acting was not in the cards for Reiner. After entering the Army in 1942, he became a teletype operator in the Signal Corps. In 1943, he was assigned to an entertainment unit and ended up touring the South Pacific as a comedian.

Reiner became a standup comedian after the war and landed a part in a 1947 review, "Call Me Mister."

The next year he made it to Broadway in "Inside U.S.A.," and a year later turned up on television in a program called "54th Street Revue." That show competed against "Admiral Broadway Revue," which starred a rising comedian named Sid Caesar.

When Caesar was given his own program in 1950, "Your Show of Shows," Reiner joined him.

Critics have widely hailed "Your Show of Shows" for its adventurous comedy, written by a sterling staff that included Brooks, Neil Simon, Lucille Kallen, Mel Tolkin and Joe Stein. Though he contributed to the writing, Reiner was primarily an actor, often portraying salesmen and hosts.

He and Brooks, however, established a lifelong bond.

"We worked in the office enough and our wives became friends," he told Moment. Even after both became widowers they would get together for dinner and conversation almost every night.

In some ways, the two were opposites: Brooks the clown, Reiner the bemused observer. But it was that combination that made the pair funny, Brooks told CNN.

"He's so real, and he's so earnest," he said. "And then he begins relentlessly chasing me down and cornering me. And when he corners me I'm like a trapped rat and I spring at him something insane, and that busts him up."

"Your Show of Shows" ran from 1950-54, and Reiner continued with Caesar on "Caesar's Hour" from 1954-1957. After writing a novel, 1958's "Enter Laughing," Reiner created his own show. The original version, "Head of the Family," starred Reiner as a comedy writer who commutes to New York from his suburban family life. It didn't work, but producer Sheldon Leonard had an idea that saved it.

"(He told me), 'We'll get a better actor to play you.' And he suggested Dick Van Dyke," Reiner told CBS News.

The result, retitled "The Dick Van Dyke Show," was a huge hit, a well-crafted sitcom that offered groundbreaking takes on race, sex and the John F. Kennedy era. It ranks as one of the greatest TV series of all time.

"He was like a father to me ... though I wouldn't let him bathe me," Martin recalled at an American Film Institute event for "The Jerk" in 2009.

In the '90s, Reiner went back to acting, notching guest roles in "Frasier" and "Mad About You." In the 2000s, he performed in the "Ocean's Eleven" films and the TV series "Two and a Half Men," among others.

He also became a prolific writer of books.

In 2019 he talked to NPR about how he spent his time writing and watching movies, with actress Emma Stone being one of his particular favorites.

He was widely honored. He won several Emmys, earned a star on the Hollywood Walk of Fame and was named a Directors Guild honorary life member. In 2000, he received the Mark Twain Prize for American Humor.

But the biggest prize, he said, was his family. He and Estelle Reiner were married for almost 65 years; his children all followed him into the arts, with son Rob becoming a noted actor and director himself.

"Show business is only 8 to 12. And the rest is your family. You're only doing it so you can have a family and a house. Without a wife and children, show business means nothing. You're doing it to make a living, but enjoying doing it and getting paid for something you love to do," he told the Boston Globe.

And to what did he owe his longevity? For one thing, he kept his priorities straight.