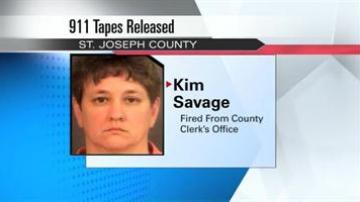 ST. JOSEPH COUNTY, Ind. -- ABC57 obtained the 9-1-1 call that former bookkeeper for the St. Joseph County Clerk's Office Kim Savage made right after an accident in 2011. Savage is accused of convincing two women to put money in her bank account for two men serving overseas, but those men didn't exist, according to court documents.

According to court records, police say Savage was on the phone with one of her victims in 2011 when she was in the car accident. Court records say she was talking in the voice of "Chad Montbriand" when she had the accident, then slipped and spoke in her normal, female, voice.

The victim believed Chad was a Marine serving in Afghanistan.

It was that slip up that unraveled the alleged scheme and led to Savage's arrest.

Savage: Hi, this is Kim Savage and I'm at the Juvenile Justice Center. And I just had an accident.

911 dispatch: Okay is anybody injured?

Savage: No it doesn't appear to be.

Savage: Yes I am

911 dispatch: What kind of vehicle?

The accident happened only one mile from the courthouse were Savage worked as a bookkeeper for the St. Joseph County Clerk's Office.

Investigators searched her work computer and office space to see if she committed any fraud in the workplace. Her boss told ABC57 when she was arrested that she didn't believe any county funds were compromised.

Savage is still in the Saint Joseph County Jail.

Her next appearance before a judge is on December 2nd where they will set her trial date.

Savage has not been charged with any fraud related to her job with the county's finances.