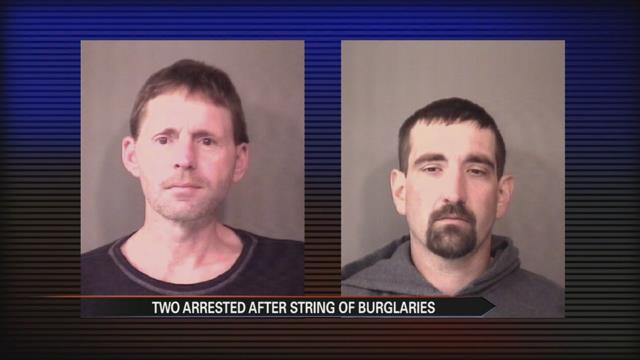 A quiet lake community was shaken by string of recent robberies in Kosciusko County.

Thousands of dollars of goods were stolen from dozens of homes during a two-month span.

For North Webster residents and visitors alike, burglaries and theft of this magnitude are quite the shock.

“They probably think they would get by with it. Being a quit little town. They thought we’ll try it here,” said Ike Slone, whose daughter lives in North Webster.

41 year old Kurtis Micheal Gunkel of Warsaw and 35 year old Eric Warren Swick of Macy  were both arrested and charged with 34 different counts of felony burglary and theft after a month long investigation.

Police say the two stole an estimated $20,000 worth of goods since the beginning of April, including TV’s, power tools, fishing equipment and much more.

An Indiana state trooper said that homes in resort towns like North Webster are susceptible to break-ins because residents are often gone through the winter months.

“It’s a shame that they do it and they get away with it. But after a while it catches up,” said Slone.

If not for the help of a local citizen who was out fishing the two may still be on the loose.

The anonymous tipster was able to provide officers with photos from his cell phone, which eventually led to Gunkel and Swick’s arrest.

The trooper also said that thieves troll the neighborhoods to see movement and if they suspect the victims are away from their homes, that’s when they’ll strike.

With the Memorial Day holiday North Webster should triple in population as boaters and visitors come for vacation. Residents are urged to plan accordingly.