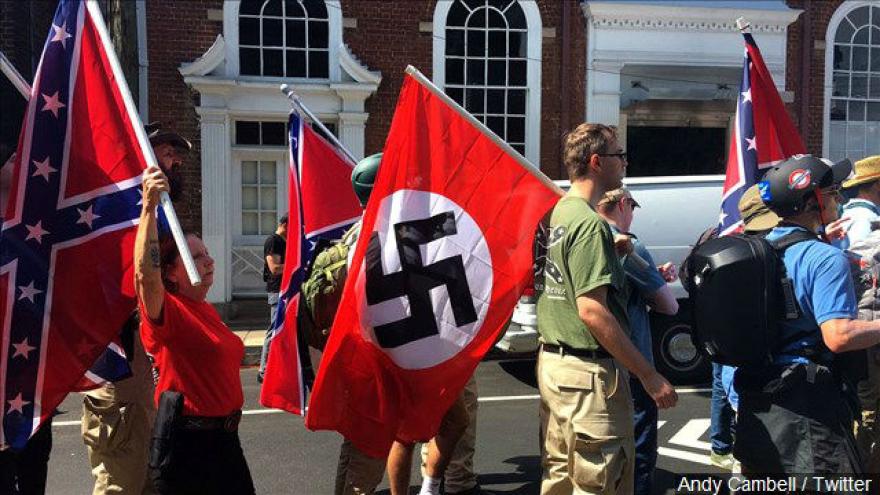 (CNN) -- An Ohio driver accused of plowing into a crowd protesting a white nationalist rally in Charlottesville, Virginia, killing one woman, is facing an upgraded murder charge.

James Alex Fields Jr., of Maumee, Ohio, initially was charged with second-degree murder and other offenses, including malicious wounding and failure to stop in an accident that resulted in death. The most serious charge is now first-degree murder, prosecutors said Thursday.

Police say he fatally struck Heather Heyer, a 32-year-old Charlottesville paralegal, and injured 36 others on August 12.

The victims were demonstrating against the "Unite the Right" rally, which drew white nationalists and other far right organizations who opposed the city's decision to remove a statue of Confederate Gen. Robert E. Lee.

Prosecutors announced the upgraded charge at a court hearing, but didn't give details. Prosecutors also showed two videos -- including one from a police helicopter -- that authorities said captures Fields' car stopping down the street from protesters, then driving into the crowd before speeding away.

Fields, whose wrists and feet were shackled, attended the hearing.

More than two dozen of Heyer's friends and family, including her mother, Susan Bro, packed the courtroom. Two wore purple shirts emblazoned with Heyer's photo and an anonymous quote she once posted on Facebook: "If you're not outraged, you're not paying attention."

Fields' attorney, Denise Lunsford, tried to paint her client as a sympathetic character as she cross-examined a Charlottesville detective investigating the case. The detective, Steven Young, who testified for the prosecution at the hearing, acknowledged that Fields said "I'm sorry" several times after he was apprehended.

Fields was apprehended about four minutes after the collision, about a mile away.

He was shocked, and cried and sobbed, when he later learned of the fatality, Young said.

Fields' case is scheduled to go to the grand jury on Monday.

Several days after the rally, President Donald Trump sparked a political firestorm when he said he believed "there is blame on both sides" for the incidents in Charlottesville.

Days later, demonstrators interrupted and blasted Charlottesville City Council members in the governing body's first meeting since the violent clashes. Attendees at the packed meeting said they were upset the "Unite the Right" rally was allowed to happen.

Demonstrators stood on the dais and unfurled a large banner that read "BLOOD ON YOUR HANDS."

Two Virginia state troopers were killed in a helicopter crash nearby after monitoring events on the day of the rally.

The Charlottesville City Council had previously voted to remove the Lee statue in the former Emancipation Park, along with a Stonewall Jackson monument, and drape them in black cloth to mourn the lives lost. The next court date in the legal battle over removing the monuments is set for February 5, 2018, CNN affiliate WVIR reported.

Earlier this month, an independent review faulted Charlottesville police for their response to the protests.

The 220-page report by the law firm of former US Attorney Timothy Heaphy criticized Charlottesville for failing to properly prepare for the August rally by not providing police on the ground with specialized training. Charlottesville officials hired Heaphy's firm to investigate the city's response to the protests.

After the report was released, Police Chief Al S. Thomas Jr. said he was "committed to implementing" the report's recommendations. Those recommendations included ensuring public safety officials share intelligence and reach out to peers in other cities for advice, and having officers separate conflicting groups.

This week, the city denied a permit request from Jason Kessler, the organizer of the August "Unite the Right" rally, to hold another rally in Emancipation Park a year after the violent clashes, WVIR reported.