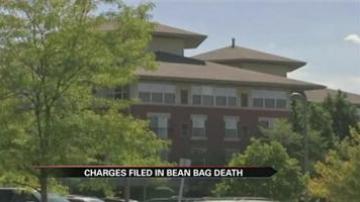 PARK FOREST, Ill. -- An officer involved in a standoff with a 95-year-old man was charged with reckless conduct.

It happened last summer at a Chicago-area senior facility.

Prosecutors say John Wrana became belligerent with staff who then called police. When police got there they say he threatened them with a cane, a knife, and a two-foot-long shoehorn that they thought was a machete at first.

Officer Craig Taylor responded with a taser, a riot shield, and bean bags which ultimately killed Wrana because of internal bleeding.

"In an ideal world, perhaps involuntary manslaughter, because the statute specifically says where there is a death and there is no question that there was a death that resulted here," said Wrana family attorney Nicholas Grapsas.

An investigation by the state's attorney's office found there were other options to end the matter.

It also found that Taylor was six to eight feet away when he fired the beanbags. The minimum required distance is 15 feet.