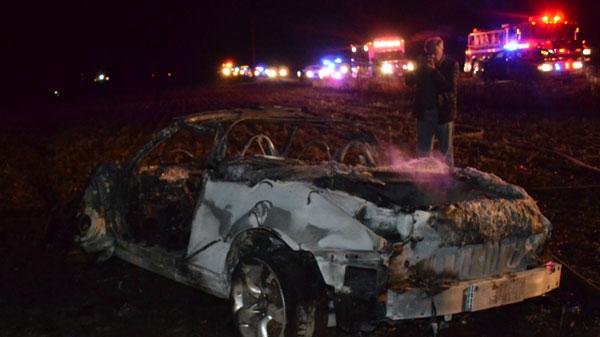 The driver of a vehicle involved in a fatal accident Saturday west of Milford has been arrested along with another individual.

The Milford Fire Department found a charred body in the passenger seat of the vehicle, but no other occupants.

The passenger was identified as Kami L. Ellis, 27, of Nappanee.

Ellis died from blunt force trauma as a result of the vehicular crash, according to Kosciusko County Coroner Michael Wilson.

The investigation revealed Scott Wilkins, 36, was picked up by Vicki Lynn Simmons, 61, after the crash, according to the Kosciusko County Sheriff's Department.

Wilkins and Simmons were found at the Warsaw Holiday Inn Express at approximately 5:48 a.m.

Wilkins requested medical attention for multiple injuries from the crash and was taken to the Kosciusko Community Hospital, then transferred to Lutheran Hospital in Fort Wayne.

Simmons was arrested and preliminarily charged with felony aiding/causing/inducing.  Simmons' was bond was set at $2,000.

Willkins told police a deer ran into the road and he swerved to miss it. The car then began to slide sideways, went across the road, struck a tree and sign before it ended up in the field and caught fire.