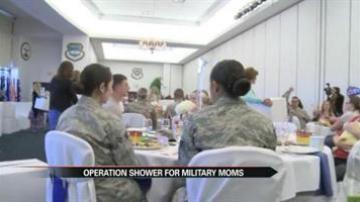 SCOTT AIR FORCE BASE, Ill. -- Military families across the country are dealing with a lot of unknowns during the government shutdown but a charity is making sure new military moms are showered with love.

It is called "Operation Shower" and it is helping new and expectant mothers, whose spouses are deployed, prepare for their bundles on their own.

One woman's husband is overseas and would not be home until after their second child is born.

So far "Operation Shower" relief has made a big difference in the morale of 1,700 military families around the country.