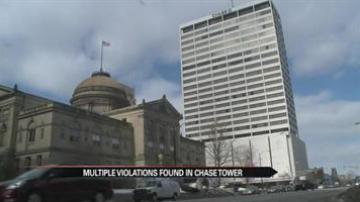 It was the only bidder on the property.

The Chase Tower has a new owner - sort of.

It is the same company that has held the bank note for the past year.

"It's just cleaning up the title. They can start from scratch and work on it, put some more money into it and get it straightened out," said Andy Pletcher of the St. Joseph County Sheriff's Department.

But a lawyer representing the court-appointed receiver says it'll be awhile before the  building itself will get any significant  upgrades or repairs.

"The management will continue because management was under the direction of the receiver, so nothing changes until the receivership is terminated," said Michael Hardy of Barnes and Thornburg.

That means all of the violations will wait until the new owner decides to fix them.

We asked the attorney for Washington Square Realty what they planned to do about it.

"My client doesn't give me any authorization to comment. Thanks," said John Humphrey, attorney with Taft Stettinius & Hollister.

When the building was purchased, the company paid the $347,000 in unpaid property taxes.

On behalf of the new ownership, THE TOWER AT WASHINGTON SQUARE, LLC…

We are very excited about our investment in South Bend.  We are aware of the current challenges facing the building and look forward to working with the new management team in  addressing these issues over the coming weeks and months, in an orderly and prudent manner.

As you are aware, we just acquired the building today at the Sheriff’s sale only a few short hours ago and are diligently crafting an  overall plan for all the work and improvements required  to return the building to its former Class “A” status.

This will be a large scale investment and Herculean task, but the new ownership is very prepared and committed to the task at hand.