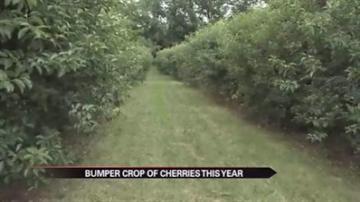 NILES, Mich.-- Crops are showing a spectacular turn around after last year’s devastating drought. "You pick" season opens at Lehman's Orchard on July 1st and they expect families to flock to their vineyard.

Many families planned their vacation around pickin' season last year, and they were upset when there were no cherries.

“We didn’t have any crops to pick so they were really disappointed to not get their cherries last year” Steve Lecklider said.

Lehman’s orchard has been run by their family for four generations.

“You can make wine out of them or pie… you can use them in cooking or cobblers!” Steve Lecklider said.

In full, Lehman Orchards tends twelve acres of cherry trees and they have a pitter machine that’s sixty years old.

This season they have also installed a new bird call machine to keep birds from eating the cherries. While birds and drought are huge problems, they also have to deal with frost.  Green houses help protect at least part of the crop.

Steve Lecklider said “You may have a weather event where you have a partial freeze in the spring and it will take part of the crop and destroy it, but part of the crop will still be safe. So the problem with that is it blooms in phases so it also picks in phases.. so you have to go through and just pick the blue and pick the others later.”

The wine they make at Lehman’s orchard has won numerous awards, but it is the cherries that keeps people picking!