Chicago Cubs advance in the playoffs 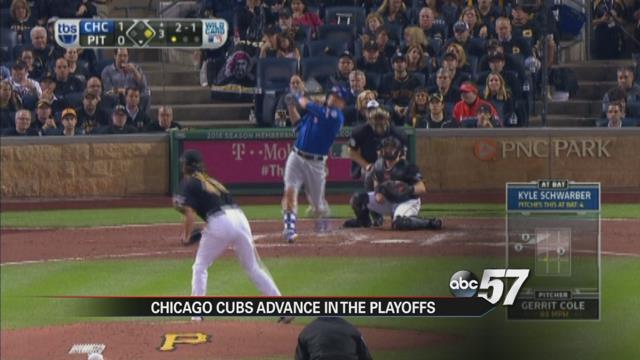 The Chicago Cubs' chances at winning their first World Series in 107 years just got a lot better.

The Cubs defeated the Pittsburgh Pirates in a winner take all wild card game Wednesday night to advance to the next round of the MLB playoffs.

The Cubs came into a very hostile environment at PNC Park, a record 40,889 were in attendance.

A masterful pitching performance by Jake Arrieta and a 3 RBI night by Kyle Schwarber was the difference in Wednesday night’s 4-0 victory over the Pirates.

Schwarber got the Cubs on the board early bringing home Dexter Fowler on an RBI single in the first inning and then in the third, Schwarber knocked in a 2-run homer, his third RBI of the game.

Jake Arrieta, in his first postseason appearance, didn’t allow a run and struck out eleven in nine innings of work.

The Chicago Cubs advance to the National League Division Series for the first time since 2008.

Game 1 against the St. Louis Cardinals is Friday at 6:30 in St. Louis.