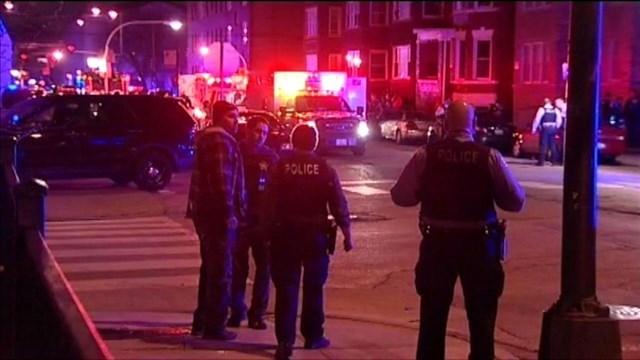 (CNN) -- Growing gun violence has created a sense of hopelessness in Chicago, a prominent priest and community activist told CNN.

"I had a child asking me to pray for her, that she would not get shot going to school this year," said the Rev. Michael Pfleger.

"We have more murders here than New York City and Los Angeles together. And we're lacking a strategy or plan to say how are we going to turn this around."

Ninety people were killed in Chicago in August, the city's deadliest month for gun violence in 20 years.

Now the city looks set to cross a disturbing threshold and easily surpass the number of homicides that occurred in 2015. There have been 474 homicides reported in Chicago this year, compared to 474 in 2015.

One of the most shocking killings occurred August 26 when Nykea Aldridge was pushing a baby stroller and was caught in the crossfire of a street shooting. She was the cousin of Dwyane Wade, the 12-time NBA All-Star who recently signed a contract with his hometown Chicago Bulls.

Pfleger, a pastor at Saint Sabina Church and a social activist on Chicago's South Side, compared the killings to a natural disaster.

"We have a flood and fire and earthquake of violence and blood on our streets," he said.

Police are frustrated, too

Chicago Police Superintendent Eddie Johnson said police officers are highly upset by the violence and the community response. Witnesses to gun violence very often are not willing to talk with investigators, Johnson said.

"These men and women are working their tails off out there," he said of the police force. "And I'll tell you this, it's frustrating for them to arrest a guy on Friday for an illegal gun and then the next Thursday they see him right back out on the street with another illegal gun."

Cooperation and communication between law enforcement and the community also needs to be addressed, Pfleger said.

"Never in my life in Chicago -- and I'm raised in Chicago -- have I seen the relationship between law enforcement and police and the community worse than it is right now," he said.

Pfleger said the same problems exist in the American cities with the biggest violence problems.

"You see double digit unemployment. You see poorly funded and under performing schools.... You see abandoned buildings and communities that look like third world countries. You see a proliferation of guns, no options or opportunities, no economic development."

"Unless we have the courage to change the playing field, we are not going to see an end to this," Pfleger said.

In response to the violence, Mayor Rahm Emanuel plans to hire hundreds of new police officers, the Chicago Tribune has reported.

Illinois Gov. Bruce Rauner recently signed a new gun control that imposes stiffer penalties on anyone without a gun-owner identification card who brings a gun into the state intending to sell it.