Chicago police officers injured while breaking up a fight 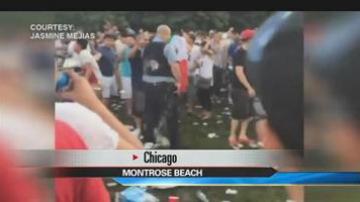 Two Chicago police officers were injured after breaking up a fight.

A party that was promoted on social media attracted hundreds of people to Montrose Beach. Police were called to the scene after a fight broke out near the harbor.

When officers tried to break it up people started throwing bottles.

Two officers were injured. One was treated at the scene and the other was taken to the hospital for minor injuries.

Nine people were taken into custody. Charges are pending.