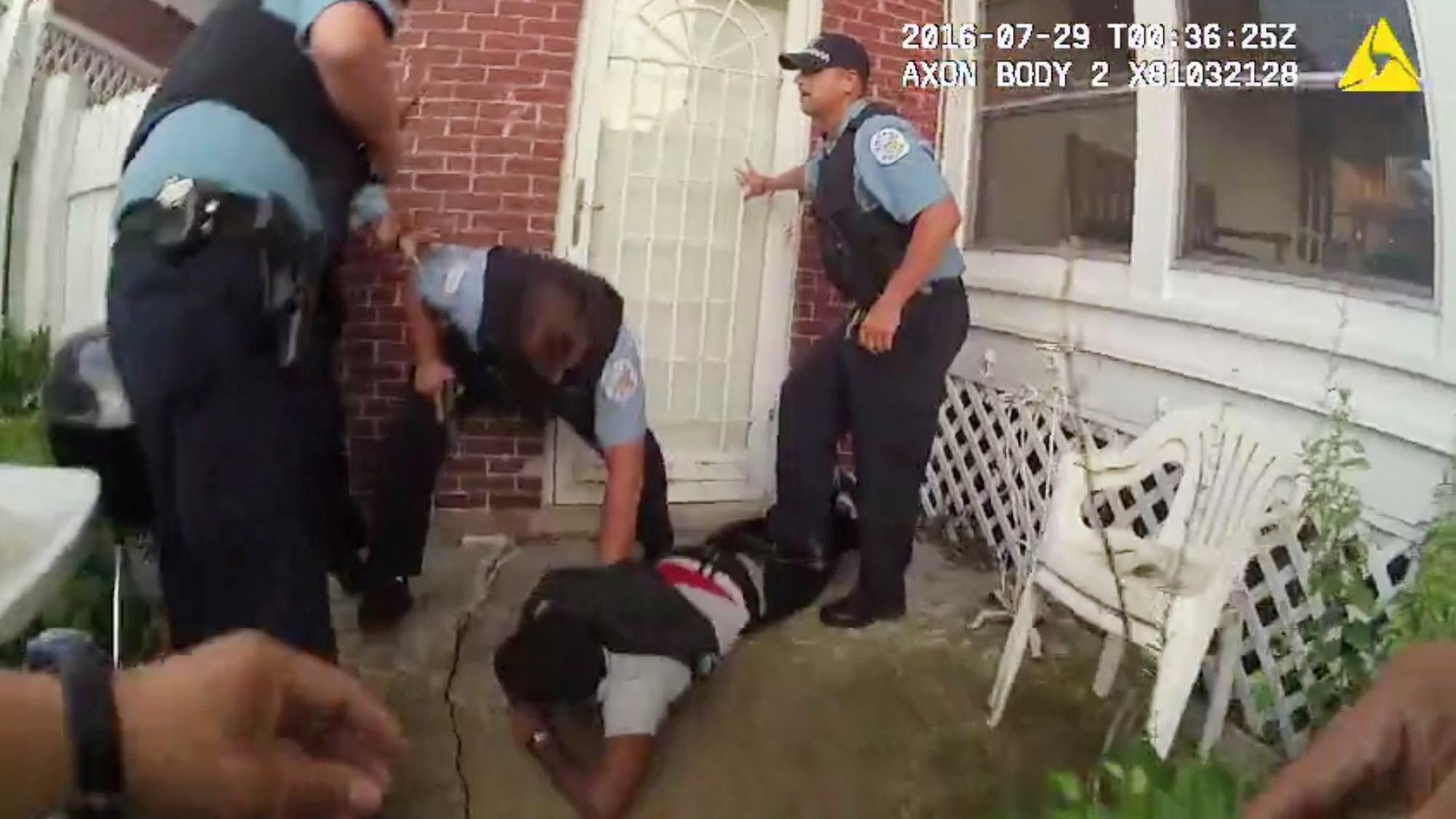 (CNN) -- Chicago officers are seen firing at least 15 shots at a black Jaguar as it races down a tree-lined street. The car crashes. The driver bolts. Officers chase him down a driveway between brick houses and over wooden fences. Then multiple shots are heard.

Moments later, officers curse at 18-year-old Paul O'Neal as they put him in handcuffs as he lies face down. Hands behind his back, his arms appear limp. The back of his shirt is covered in blood. An officer holds his foot on O'Neal's leg. Another holds down the mortally wounded man's head.

The actual shooting, which occurred on July 28, isn't seen in the footage because the officer's body camera didn't record the moment he opened fire. However, police say the officer who shot O'Neal in the back violated policy. The teen, police learned, was not armed.

This video footage was released on Friday.

Sharon Fairley, head of the police oversight board that released the video, described the six videos as "shocking and disturbing."

The teen's family saw the footage before it was released to the public on Friday. Ja'Mal Green, a family spokesman, told CNN the relatives O'Neal's mother and sister walked out.

"They can only take so much," he said. "Once the gunshots started, they immediately left the room ... crying, breaking down."

Michael Oppenheimer, who's representing the family, said what he saw was "street justice," with the police playing "judge, jury and executioner." He praised the relatively early release of the videos but called for a special prosecutor.

According to Oppenheimer, one officer in the video is heard saying: "F---, now I'm going to get a 30-day suspension."

O'Neal's sister, Briana Adams, broke down during a news conference.

O'Neal led police on a chase through the South Side of Chicago. He had been suspected of stealing a car. The officer who fired the fatal shot was in a car that crashed with the Jaguar that O'Neal was driving.

Whether the crash had an impact on the camera's ability to record is under investigation, according to police. Investigators are also looking into whether the officer had turned it on.

Oppenheimer said the officer's body cam could have been shut off or manipulated.

"It is unbelievable to think that this new technology ... simply didn't work," he said.

Fairley said that "as shocking and disturbing" as the video is, it's "not the only evidence to be gathered and analyzed when conducting a fair and thorough assessment of the conduct of police officers in performing their duties."

Three officers have been relieved of their police powers.

O'Neal's family on Monday filed a federal civil rights lawsuit against the officers, alleging that they fired at the teen "without lawful justification or excuse."

Chicago, a city rife with tension

Many in the nation's third-largest city are still reeling from the 2014 Laquan McDonald shooting, which left a Chicago officer facing a murder charge after more than a yearlong delay in releasing dashboard camera footage. And earlier this year, a task force established by the mayor released a report accusing police of widespread racism.

Police Superintendent Eddie Johnson in a statement Friday vowed "full cooperation" in the investigation by the Independent Police Review Authority.

"My promise to the people of Chicago is that we will be guided by the facts and should wrongdoing be discovered; individuals will be held accountable for their actions," the statement said.

"The shooting of Mr. O'Neal has raised a lot of questions about whether departmental policies were followed... (We) will not wait to look for ways we can learn from this incident."

When Johnson attempted to read the statement to reporters outside police headquarters, a small group of protesters interrupted.

"There's no need to say anything," a young woman said of the superintendent, who eventually gave up and returned to headquarters without uttering a word.

The officers had received their body cams eight to 10 days before the shooting as part of a pilot program, a department spokesman said this week.

Police cannot legally shoot fleeing suspects unless they pose a threat to an officer's life or unless the officer has a good-faith belief the suspect poses a substantial danger to the public.

And department policy prohibits firing into a "moving vehicle when the vehicle is the only force used against the sworn member or another person."

Deep-seated distrust of law enforcement continues to plague relations between police and some Chicago communities.

In 2014, McDonald, a black teen who was walking away from officers with a knife in his hand, was shot 16 times by a police officer.

It took more than 400 days for the release of the dashboard camera footage of that shooting. The officer, Jason Van Dyke, is facing murder and misconduct charges, and has pleaded not guilty.