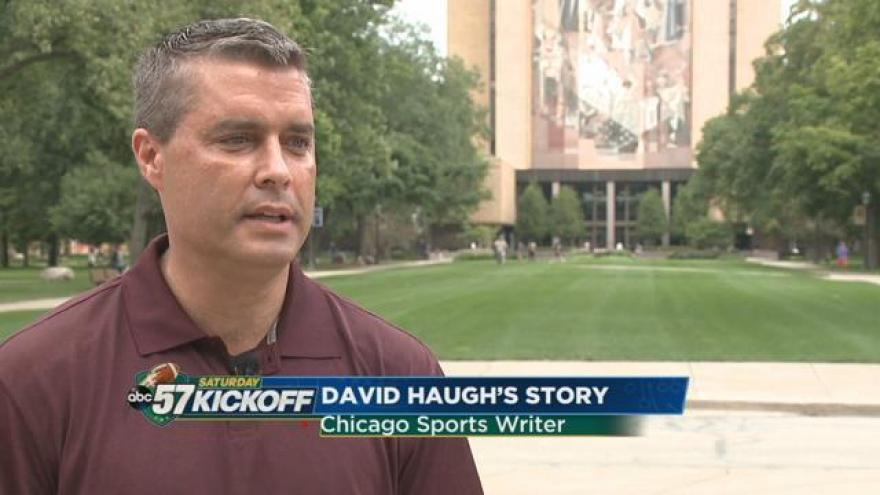 Chicago Tribune columnist David Haugh grew up in the shadow of the Golden Dome not far from South Bend. His talent as a writer and an athlete has taken him out of that shadow and into the spotlight.

Haugh tells it like it is and doesn't apologize for it.

Haugh has made a living, sharing his opinion. An opinion that doesn't always sit well with fans, especially at Notre Dame.

Haugh got his start in journalism at the South Bend Tribune as an intern and quickly rose through the ranks as a Notre Dame beat reporter and eventual columnist.

"It was a great time to be a columnist in South Bend, Indiana, let's put it that way. The 90s were great fodder for columnists and commentators of Notre Dame football because there was tons of dysfunction and it was a difficult time for fans," Haugh said.

"I think the one that hurts fans the most, he had 'ND No Different,'" Bilinski said. "If you're going to have an opinion, you've got to prove it and he was always good at that. Chicago Tribune obviously recognized how great he is."

In 2003, Haugh became the columnist for the Chicago Tribune in the third largest media market in the world.

"My mom still lives there, I love it. I love being a small town kid, I'm always going to be a small town guy. But you know I was fortunate to have some breaks along the way," Haugh said.

His past may be small but his future had big aspirations, getting his first taste of media at the hometown radio station.

"My first job, I was a country music DJ at a 5000 watt country music station, WKVI FM. WKVI 99.3 FM, voice of the Kankakee Valley. And I was 16 years old and I was sitting there playing Ronnie Milsap and The Judds and feeling like I was a one-man show on the weekends when I was 16. And that's how small the town was that I grew up in," Haugh said.

But it was Haugh's talent on the football field that allowed him to spread his wings. He was an Indiana state record holder at North Judson.

Haugh earned a scholarship to play at Ball State where he was an all-conference safety.

But he traded in his helmet for a laptop and used his experience to relate to players on a different level as a writer.

"It hasn't hurt. In the college game, covering college football, there are a lot of contacts that I've run into over the years, coaches that I've known, coaches that I've played for. Coaches that have coached here and elsewhere. I know what it's like to get embarrassed on national television. You know, I can relate to the feeling of being on ESPN highlights and chasing a receiver the last 20 yards of a touchdown pass that was 86 yards long in the California Raisin Bowl. That was me, and I still have the video somewhere. It's still humbling," Haugh said.

"It's a larger audience, certainly a larger market but you're still dealing with people. You're still dealing with the same sorts of things that are universal. Grief, disappointment, joy, ecstasy, agony. All those things are transferable. People can relate to that. And as a writer, if you can find what people can relate to, it doesn't really matter how big your audience is," Haugh said.

Even now, after nearly 30 years in the business, Haugh lives by his mom's advice.

"Do something you like, if you have to work the rest of your life, enjoy it," Joan Haugh said.

"It is a dream job, I never take it for granted. I was lucky that a lot of people took chances on me and gave me a lot of responsibility early. But when I'm sitting there in the press box at Soldier Field or covering the Cubs in the playoffs and I think back to when I was 14 years old getting the paper on Sundays, the Chicago Tribune, I wanted to be that guy. I wanted to be what I'm doing now and so I do occasionally think I've been really lucky to be in the position I'm in and I don't take it for granted," Haugh said.

While Haugh still covers Notre Dame occasionally, this season he has had his hands full in Chicago covering the Cubs winning the World Series.