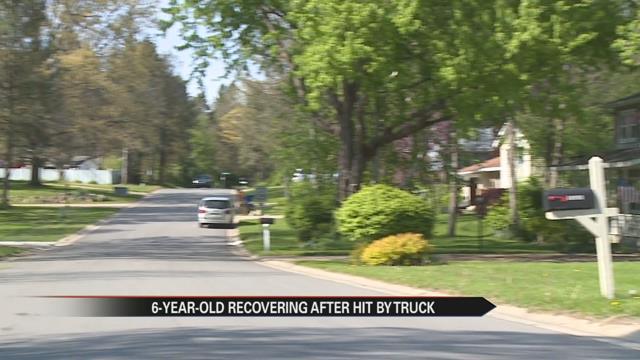 The family of 6-year-old Beck Ivie says he will make a full recovery after colliding with a vehicle while riding his bike Saturday.

The child remains in the hospital under observation.

Ivie was riding his bike with his siblings on Pine Tree Lane around 4 p.m.

Police say a pickup truck driven by Ty Dominiak of South Bend was driving on Country Knolls Drive. The two collided at the intersection.

Police say Dominiak and his passenger are cooperating with the investigation.

Julie Hahn lives on the corner where the streets meet and was working in her front yard when the incident occurred.

“I heard some of the most terrible sounds I’ve ever heard and a lot of screaming and then he was lying on the ground after the truck hit him,” said Hahn.

As a mom of four, Hahn says her kids and many others play in the area but it can often be dangerous.

“It’s a very blind corner, there’s some hills and dips in the road and people just don’t slow down,” said Hahn.

Neighbors cleared the branches at the intersection Sunday afternoon to make the visibility better. Still, Hahn says drivers need to be extra cautious.

“Instances like this, there are little kids coming out of side streets with their bikes and we have to share the road with the pedestrians and the kids who live in these neighborhoods and I don’t want to see anybody else, this kind of a tragedy happy to anyone else,” said Hahn.