Chilly & snowy start to April 2016, but not the coldest 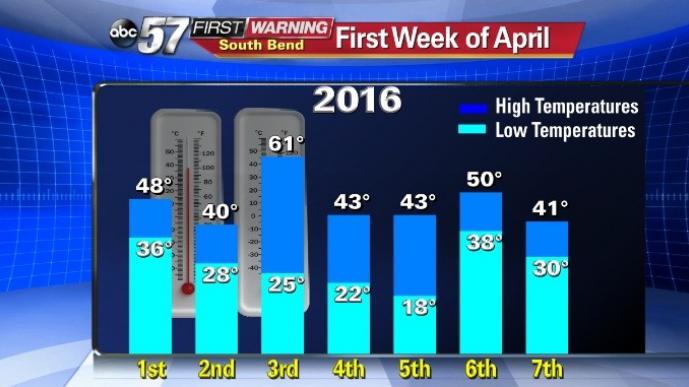 We've seen thunderstorms, hail, sleet, rain/snow mix, and snow- ALL within the first week of April 2016.  As we look ahead to this weekend as highs are expected to only warm-up into the mid to upper 30s, which could easily break the top 5 coldest highs for April 9th, we look back to the coldest April's on record to see if April 2016 ranks as one of the coldest. Now let's compare the first week of April from the top 3 coldest to 2016. Each of the top 3 coldest show overnight lows into the upper teens and lower 20s, for most or all of the lows.  As for high temperatures, the top 3 barely make it to the low to mid 40s, let alone 50° never appeared in the top 3 coldest.  As for 2016, we did start off on a warm note, but that quickly changed on the 5th & 7th.

Since we are tracking another dose of frigid temperatures for this Saturday, April 9th, lets take a look at the top 3 coldest April 9th high temperatures on record: As we mentioned before, the forecasted high for Saturday is 36°, which could easily break the top 5 coldest highs.  Not only are we tracking bitter cold, but we're also tracking snow showers during the first half of the day.  Through April 7th, we've seen 1.4" of snow, which is also the monthly normal snowfall for South Bend and to top it off, we typically see our last spring snow on April 6th. Stay up to date with the latest updates to your forecast by checking back daily here and make sure you have the ABC57 First Warning Neighborhood Weather App on your smartphone so you can be alerted to the ever-changing conditions in your area.

Special thanks to the National Weather Service of Northern Indiana for the additional stats on the coldest first week of April on record.