China to US: Be 'cool-headed' on North Korea 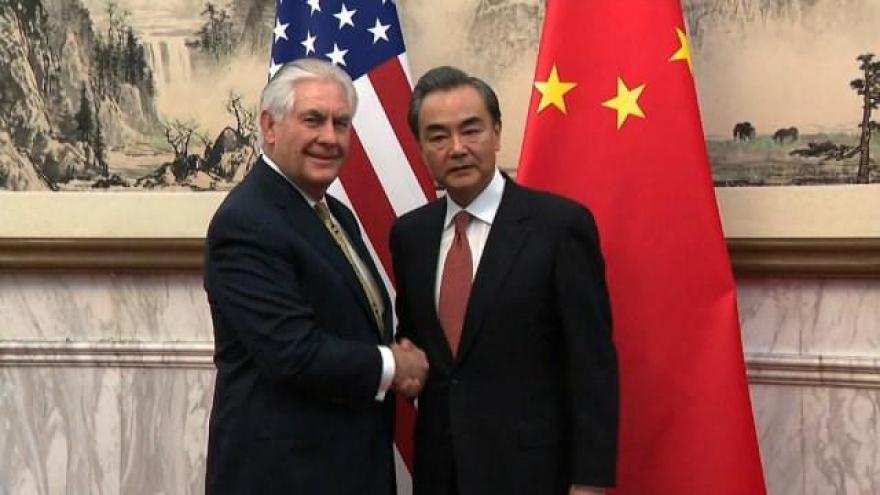 US Secretary of State Rex Tillerson arrived in the Chinese capital Saturday after issuing the administration's bluntest warning yet to North Korea, saying that no option was off the table -- including military action.

For two hours, Tillerson met with his Chinese counterpart Wang Yi, who said the US should "come back to the right track of a negotiated settlement."

Tillerson said that North Korean tensions had reached a "dangerous level" and said China had agreed to work together to make Pyongyang "change course," -- though he didn't give further details.

Beijing was Tillerson's final stop on his first official trip to Asia after visiting Japan and South Korea. The trip follows a string of North Korea missile launches and comes amid fears it's preparing for another nuclear test.

Beijing is North Korea's only real ally and its main economic benefactor, accounting for 70% of the country's trade.

US President Donald Trump has repeatedly called on Beijing to use its leverage over its unpredictable neighbor -- and on Friday again singled out China, tweeting, "North Korea is behaving very badly. They have been 'playing' the United States for years. China has done little to help!"

On Sunday, Tillerson will meet with Chinese President Xi Jinping, who's expected to meet with Trump next month. Tillerson was expected to raise the prospect of financial penalties on companies and banks that do business in North Korea.

"The Trump administration is banking that threats of US military action in South Korea and tougher sanctions on Chinese entities will intimidate Beijing into changing its policies," said Ashley Townshend, a research fellow at the United States Studies Centre at the University of Sydney.

On the trip, Tillerson has signaled a new approach toward North Korea, saying that Washington's policy of "strategic patience" had ended with efforts over the past 20 years to halt North Korea's nuclear development a failure.

Beijing, however, has been irked by calls that it isn't doing enough to lessen tensions in the region.

Wang said China had made an "important contribution" to supporting US engagement with Pyongyang but stressed it was, at its core, an issue between the US and North Korea.

An unbylined opinion piece in the Global Times, a state-run tabloid, Friday made a similar point.

"Washington and Seoul are trying to shift all the burden of solving the North Korean nuclear issue onto China and include China into their strategy toward Pyongyang," it said .

"But that way, China and North Korea will become enemies, further complicating the conflict. The North Korean nuclear issue is caused by Washington-Pyongyang confrontation, to which China has no obligation to shoulder all the responsibilities."

Wang also said that he hoped the US would examine its plans to defuse tensions, although Tillerson has already dismissed the proposal that the US should drop joint military exercises with South Korea as a show of good faith to Pyongyang.

He said Friday that Washington did "not believe that conditions are right to engage in any talks at this time." However, on Saturday Tillerson didn't rule out negotations altogether:

He said he would work with China to "bring North Korea to a different place where we are hopeful we can begin a dialogue."

Tillerson is also in Beijing to iron out the details of a tentative Florida summit scheduled in April between Trump and China's President.

It would be the first meeting between the two men, in what many argue is the most important bilateral relationship in the world.

Despite fiery rhetoric on the campaign trail and prior to his inauguration, Trump and his administration have taken a relatively hands off approach to China so far. Tillerson's visit has the potential to set the tone for the relationship.

Trump has not followed through on campaign threats to label China a currency manipulator or impose steep tariffs on Chinese imports. He also endorsed the "One China" policy, which has governed relations between the US, China and Taiwan for decades, after questioning its legitimacy shortly after his election.

Tillerson also will likely raise Beijing's build-up in the South China Sea. At his confirmation hearing, Tillerson suggested Beijing should be denied access to the artificial islands it's built in the disputed waters.