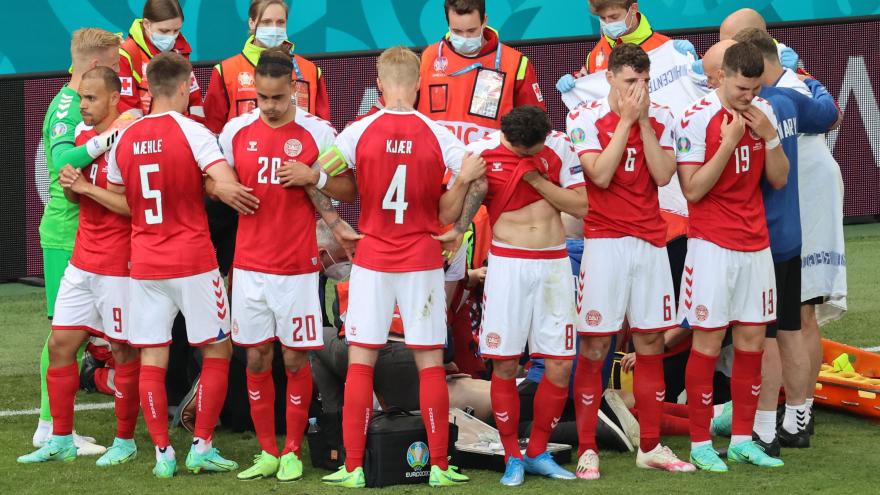 (CNN) -- Denmark star Christian Eriksen was reported to be in a stable condition after collapsing during the first half of Denmark's opening Euro 2020 match against Finland in Copenhagen.

The match was suspended following prolonged efforts from the medical staff to resuscitate Eriksen with CPR and a defibrillator after he fell to the ground during a throw-in, shortly before the end of the first half.

"Following the medical emergency involving Denmark's player Christian Eriksen, a crisis meeting has taken place with both teams and match officials and further information will be communicated at 19:45 CET," European football's ruling body UEFA said in a statement on Twitter.

"The player has been transferred to the hospital and has been stabilized."

UEFA later announced that the match would be resumed.

"Following the request made by players of both teams, UEFA has agreed to restart the match between Denmark and Finland tonight at 20:30 CET (TBC)," the tweet read.

UEFA then said that five minutes will be played at the end of the first half and "there will then be a 5-minute half-time break followed by the second half."

When the match restarted, Finland won 1-0 thanks to a 59th minute goal from Joel Pohjanpalo.

Pierre-Emile Hoejbjerg had the chance the equalize from the penalty spot 15 minutes later, but saw his tame effort saved by Lukas Hradecky.

After he collapsed, Eriksen's Danish teammates formed a wall around him to protect the Inter Milan star from view as he was receiving treatment. Players from both teams, as well as fans in the stadium, were visibly distressed as Eriksen was being attended to by medics.

"The UEFA EURO 2020 match in Copenhagen has been suspended due to a medical emergency," UEFA said in an earlier tweet.

Eriksen was eventually stretchered off the pitch after several minutes, being protected from view by the medics holding up blankets.

Journalist Mattias Karen reported that the Finnish fans inside the stadium began chanting "Christian," to which all the Danish fans responded "Eriksen."

The 29-year-old midfielder currently plays club football for Inter Milan, moving to the Serie A side in 2020 after seven years with Tottenham Hotspur in the English Premier League.

The Danish talisman, who has more than 100 caps for his country, came through the youth ranks at Ajax and started his professional career with the Dutch club.

In Group B's other match, Romelu Lukaku opened the scoring for Belgium over Russia and ran over to the camera to send a message of support to his Inter teammate.

"Chris, Chris, sterkte jongen (Dutch for 'wish you strength/all the best'). I love you!" he said.

Saturday's incident was reminiscent of Fabrice Muamba's collapse in 2012, after the footballer suffered a cardiac arrest during Bolton's FA Cup match against Tottenham. Muamba eventually recovered but had to cut his playing career short.

"All of our thoughts are with Christian Eriksen and his family," his former club Tottenham tweeted, while his Inter Milan teammate Ashley Young wrote: "PLEASE BRO PLEASE."

"Moments like this put everything in life into perspective," UEFA president Aleksander Ceferin said in a statement. "I wish Christian a full and speedy recovery and pray his family has strength and faith.

"At these times, the unity of the football family is so strong and he and his family carry with them the good wishes and prayers of everyone. I heard of fans of both teams chanting his name. Football is beautiful and Christian plays it beautifully."