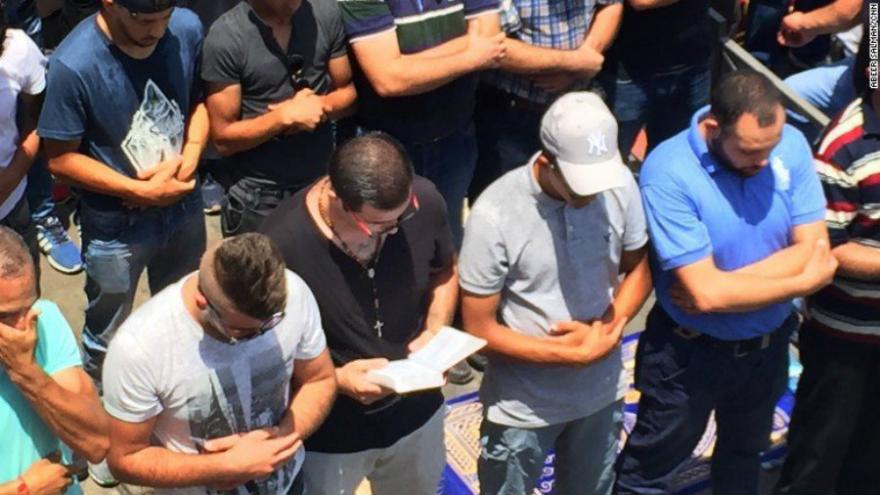 By Abeer Salman and Oren Liebermann

JERUSALEM (CNN) -- Nidal Aboud stood out as one among many. As the men around him bowed, he made the sign of the cross. As they chanted their prayers, he read the Bible to himself. And as they said "Allahu Akbar" -- God is greatest -- he stood silently and respectfully.

He was the only Christian among thousands of Muslims at Friday prayers in the Wadi el-Joz neighbourhood, outside the Old City of Jerusalem.

The photograph, taken by CNN, of this simple interfaith moment has been published in local media and widely shared on social network sites as a touching example of cooperation in a time of conflict.

The prayers took place after Israel restricted access to Al-Aqsa mosque, which sits on the holiest site in the Old City, known to Muslims as the Noble Sanctuary and to Jews as the Temple Mount.

After an attack at the Lion's Gate entrance to the site left two Israeli police officers dead last week, Israeli authorities installed metal detectors and limited entry to men over 50 and women. On Sunday, they installed security cameras, a move that is likely to further inflame tensions.

The security measures are seen by Palestinians and Arab countries as a unilateral attempt by Israel to control the site -- considered holy by both the Muslim and Jewish communities -- and they have triggered widespread demonstrations and violent clashes between Palestinians and Israeli security forces.

Aboud, a 24-year-old Palestinian who has never before joined the midday Muslim prayers, says he wanted to stand alongside Muslims as they worshiped.

"I had a dream since I was a child. I wanted to spread the world with love. I wanted to be the one who plants love in people's hearts," Aboud told CNN.

Holding a Bible with a cross draped around his neck, he said he didn't feel out of place.

"I asked my Muslim friends for their permission to pray between them. They were asking me to stand beside them," he said.

Aboud says he would refuse to walk through a metal detector if one were placed outside the Church of the Holy Sepulchre in the Old City, the biblical site of the crucifixion of Jesus Christ.

He is urging all Christians to unite with Muslims against what he says is blatant unfairness, and even urged Jews to stand against Israeli occupation.

Tensions have been high in Jerusalem and the West Bank following the attack on police in the Old City and the increased security measures.

Aboud sees his small act of inclusiveness as a way of bridging the gap between the region's religions. "I see it as a sign from God that my dream came true to be the ambassador of goodwill between religions."