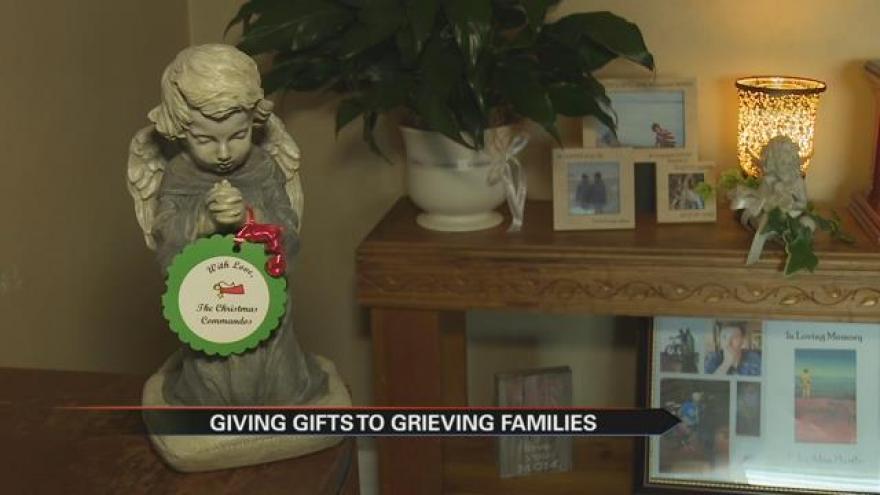 More than one hundred families in Michiana are celebrating the new year with gifts from the Christmas Commandos. ABC 57’s Jess Arnold spoke with the family of Tyler Hurtle, who was murdered earlier this year.

Ornaments and an angel add up an indescribable gift for grieving families.

“You’re here in all this grief, and I was not looking forward to Christmas. I really didn’t want any part of it,” she said.

That was until the Christmas Commandos showed up on Christmas Eve.

“It was probably about 11 o’clock or so, and we heard some noise outside that we don’t normally hear. A parade of cars going by, and a U-Haul truck, and I looked out the bedroom window, and when I did, there were 3 or 4 people coming up the driveway with Santa hats and flashlights,” said Zolman’s husband, Terry Litka.

“We opened the front door and saw all the decorations and the two boxes of gifts and the angel that was sitting on the bench,” he said. “Just the fact that says hey, we’re thinking of you and you’re not alone, and there are people that love you. It’s amazing,” said Sara.

The Christmas Commandos say ‘you’re not alone’ with personalized gifts for every member of 115 local families who lost someone during the year.

“You go from who are these people coming on my front yard to look what these people just did for us,” said Litka.

This comes during a time when grief tends to overshadow any holiday cheer.

“We’re not going to let the anger and the hate win. We’re going to let love and hope win, and nothing says that better than his little brother. His first reaction upon seeing that wasn’t about what what did I get? What could be in there? It was when I get bigger, I want to be a part of that group,” said Zolman.

This group wants no thanks—just a smile in return.

In regards to the investigation, two people have been arrested in connection with Tyler Hurtle’s murder.