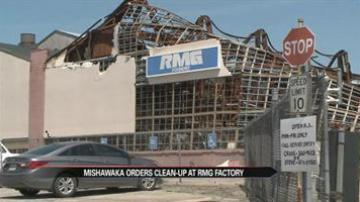 MISHAWAKA, Ind. -- The city of Mishawaka is asking the owners of the RMG Foundry building to show significant improvement in the next thirty days. Nothing has been done since the building caught fire in February 2013 and burned boats, cars and RVs stored inside.

The city wants to see some action. There have been several complaints and the city has cited the owner under the unsafe building act.

The owners have until early June to get to work.

“I would like to see a lot of progress done in removing the damaged areas," said Obren.

A dispute between insurance companies over claims slowed down the cleanup process.

The city of Mishawaka doesn't want to wait any longer.

If the owners don't comply, they could be subject to a court-ordered hearing and the potential of fines.

City officials remain confident it won’t get to that point.

We’ve Talked With The Owner Several Times In The Last Year. We tried to speak to the owner about his plans and are still waiting to hear back.