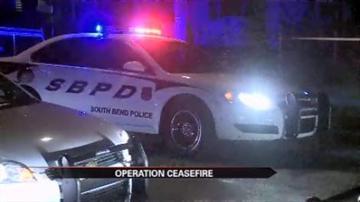 SOUTH BEND, Ind. -- After months of meetings, and discussions with experts, the city of South Bend is close to implementing Operation Cease Fire. The city wants to use the program to change the hearts and minds of young people who are at risk of committing gun violence.

This summer was less violent than last year, but that isn't stopping Mayor Pete Buttigieg and his anti-violence task force from addressing gun violence among South Bend's youth.

"Many of the forces that made for a violent summer last year could very well be brewing in our community again. We've got to get out in front of that," said Buttigieg.

The mayor calls his plan the Group Violence Reduction Strategy.

Youth involved in violence will be identified and will be spoken to during what is referred to as a call-in.

"Interacting directly with members of the groups responsible for violence and putting them on notice about what happens if their group winds up being associated with the next violent act in the community," said Buttigieg.

Three groups will talk to the young people during the 'call-ins'.

"Law enforcement is one, obviously, to talk about what's happening and what the consequences are. Secondly, though, social services, because you want to let these individuals know that if they're ready to make a change, we're ready to help. And third, probably the most important, the moral voice of the community," said Buttigieg.

Something he admits is not always possible, but says he is optimistic about South Bend's chances.

"All I can say now is, we hope to do it very soon; we don't want to do it before we're ready but we want to do it quickly because there's some momentum right now behind it," said Buttigieg.