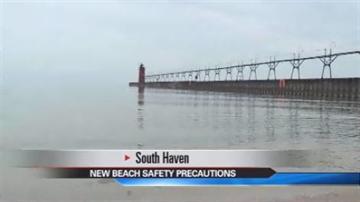 Every year beach towns along Lake Michigan warn swimmers about the unpredictable nature of the lake, but there are still drownings and accidents. The city of South Haven is taking extra steps to ensure beachgoers are safe.

The city approved the $50,000 purchase of two emergency call boxes to be installed on North Beach and one on South Beach in South Haven.

"There are a lot of drownings, a lot of accidents, people not paying attention to what’s going on,” said Marion Behrman of South Haven.

Lake Michigan is calm and smooth today, but every year it proves to be deadly for some.

Behrman has lived in the area for 15 years and has seen the dangers of the water firsthand.

"There's a lot of rip currents, if you're familiar with them. People come to the beach, they have no idea, they get in the water and away they go,” said Behrman.

In 2009, one of the strong rip currents killed a 45 year old Chicago man while he saved his own children from the rough water.

His family sued the city of South Haven for not having a better system to prevent future drowning deaths, but finally reached a settlement.

"Mr. Martin Jordan, his family filed suit against the city of South Haven and one of the tenets of the settlement is that the city would install emergency call boxes at the north and south beaches,” said Brian Dissette, South Haven City Manager.

The city purchased the boxes this week and expects to have them installed by mid-June.

"We hope that the call boxes will make it simpler if you need help. You're just pressing a button you're not giving exact directions to where you are,” said Dissette.