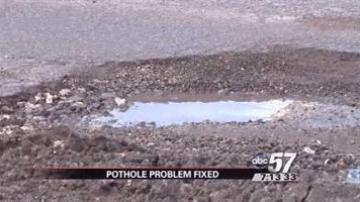 A large number of potholes formed during the recent weather.

On Friday, we found one of the worst.

It was on State Road 23 in South Bend, in an area known as the ‘five point.’

The pothole was 5-feet wide and a 1-foot deep.

It's a state road, but on Friday, shortly after we asked the city about it, South Bend road crews came out to fix the problem!

“It's a state road but as a courtesy to the citizens of south bend we figured we better come on out here because we were having trouble contacting the state,” said John Davis.

The giant pothole even caught the new mayor's eye.

"I know the one you're are talking about.  I hit it on the way to Armondos to get my hair cut," said Pete Buttigieg. "That's on a state road, so I'm going to try and get the state's attention to address that as quickly as possible because it is big."

The five poitns are now a much smoother ride.