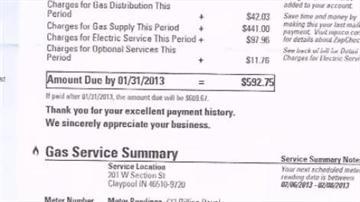 CLAYPOOL, Ind. --  The freezing temperatures have many people turning up the heat.  But one Claypool woman says she cannot afford to because her gas bill is already sky high.

But when a Nipsco employee looked at the bill.  They realized she was not actually getting her gas through Nipsco.  She was getting through a third party provider called Spark Energy.

"He said I see your problem. You are through this Spark Energy. I signed up for that years ago. I thought that was off there a long time ago," said Alan.

In 2010, Alan says she was approached by a Spark Energy salesman who told her if she signed a one-year-contract with Spark the company could buy gas from Nipsco for a lower rate.

We called Spark Energy to find out why Alan's bill was so high.

They said because she did not cancel the service after one year. They kept charging her, so as Spark Energy's rates soared, so did Alan's gas bill.

Alan claims Spark Energy has cost her thousands of dollars over the past two years.

"That's a two-week paycheck in my house," said Alan.

Her best advice is do your research.  Even if the provider is listed as a choice provider, they may not be the best choice for you.

Alan has since canceled her Spark Energy account, but she says she talked with friends who had the same problem.

We also check with the Better Business Bureau online and found nearly 90 complaints against Spark Energy.