Clean up underway after storm rips through Michiana 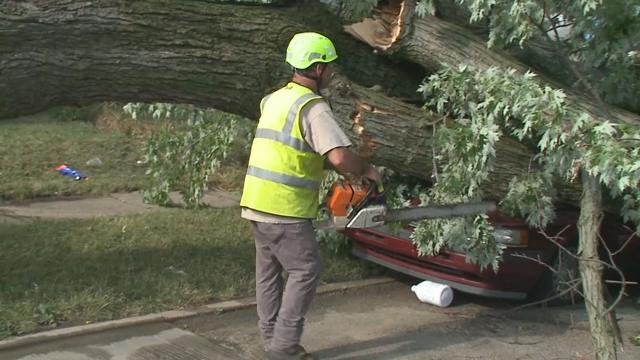 A storm ripped through Michiana including some neighborhoods on the city’s south side leaving homes damaged and many folks with big clean up efforts ahead.

Tree by tree and branch by branch.

The clean up efforts begin after a storm with high winds tore through South Bend leaving heavy damage on the city’s south side.

Block after block, the same scenes with flash flooding and down trees in streets and in yards.

From Niles to Notre dame to Rum village.

Power lines down and creating back ups during rush hour.

One woman in her vehicle was only feet from where this tree fell.

“I was sitting in my car. It was pouring down rain. And I just saw an electrical thing. Knocked it loose. Knocked that tree and I just stayed in the car,” said resident Lenita Jackson.

Clean up efforts are now underway.

The city of South Bend working diligently to clear roads and pick up any debris left over from the powerful storm.

A storm that left some South Bend residents without necessities.

There were no major injuries from this storm but power is still out for many in Michiana.