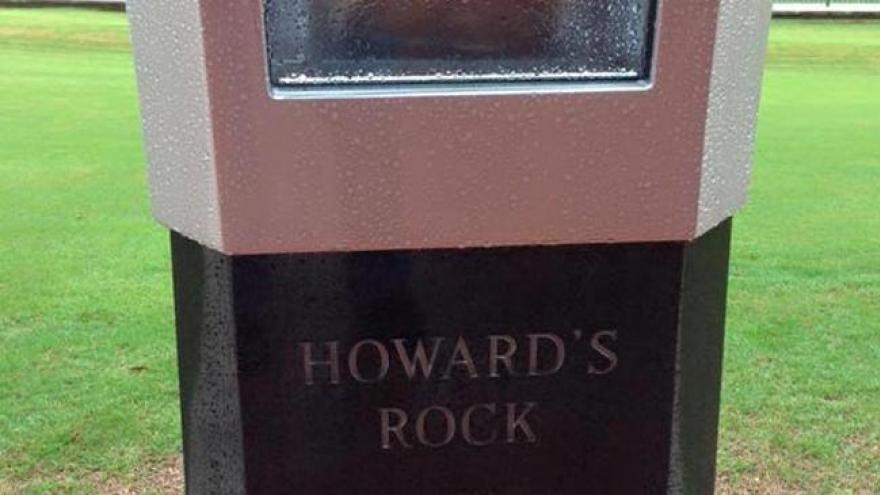 Notre Dame and Clemson have time honored traditions they follow on game day. One thing Clemson coaches and players look forward to every game day is the run down the hill and Howard's Rock.

It has been called the most exciting 25 seconds in college football.

"Death Valley. The first thing you think of is running down the hill," said Tim Bourett of Clemson football.

Every home game, players for Clemson touch Howard's Rock for good luck and then rush out onto the field to head to battle.

"The team takes buses around the side of the stadium, gets to the top of the hill, runs Howard's Rock and then the cannon sounds as the team rushes down the hill," said Bourett.

But what makes this rock so special? Bourett says it all started with a Clemson grad named SC Jones, who took a trip to Death Valley, California in the sixties.

"It was his idea to pick up a rock and bring it to coach Frank Howard. And he said here's a rock from Death Valley in California. Now you have one in Death Valley, the nickname of this stadium," said Bourett.

Howard didn't know what to do with the chunk of flint, so it sat in his office for a year.

"He was cleaning out his office one day. He gave it to someone in the fundraising department and said here, do something with it. Throw it over the fence or whatever," Bourett said.

They decided to mount it behind the east end zone in 1966. And just one year later, Coach Howard bought in.

"He told the team to rub the rock. It would give them mystical powers. And they won the game that day," Bourett said.

"When you think of Clemson there is a tiger paw and then there is Howard's Rock. Probably the top 2 icons of Clemson football," Bourett said.

Some claim there’s a little truth to the rock having mystical powers. Players have been touching it before running down the hill since 1966.

But for 2 seasons in the 1970's the Tigers went without doing that, running from the opposite end zone.

Their record at home during that stretch was a losing one, at 6-9.