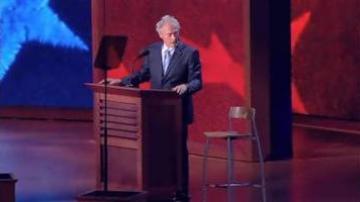 Clint Eastwood stole the show at the Republican National Convention finale in Tampa.

The actor/director was the party's mystery guest. He went on stage before Mitt Romney accepted the party's presidential nomination.

Eastwood used an empty chair as a prop for a fictional conversation with President Obama and the crowd ate it up.

President Obama fired back on Twitter. A photo of the president sitting in a chair marked with a nameplate saying "The President" was tweeted.