Coach Brian Kelly pleased with the outcome of Blue-Gold game 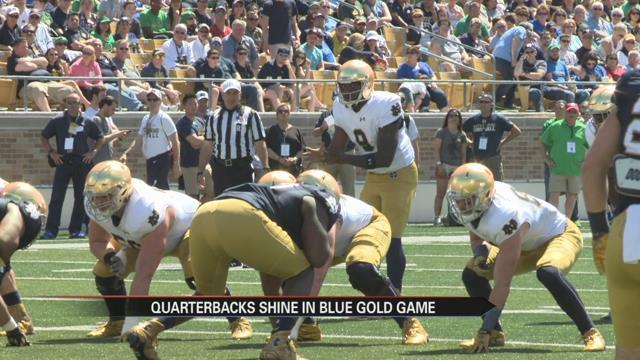 Dexter Williams would take the first handoff for a 16-yard touchdown for the first score. Blue up 7.

Then QB Malik Zaire scores on a 13-yard run to tie it up at 7-7 in the second quarter.

John Chereson came in with a 22-yard field goal just before the half putting Blue up 10-7.

Into the third quarter no scores were made.

Reserve QB Montgomery VanGorder would put the Blue up 17-7 in the fourth quarter with just 1:45 left in the game and Blue would end up coming out on top.

Coach Kelly’s response to the game

Coach Kelly wasn’t just pleased with the team on the field but the fans who came out to support the Fighting Irish.

“Great crowd, great atmosphere. I was really happy with the game in itself. You know, any time you break up a squad and you feel like there's some areas where you're a little bit thin in terms of personnel, you always are concerned about how you're going to get through the game, but I thought it went extremely smooth,” said head coach Brian Kelly.

And as far as the team and injuries, coach Kelly says there were no serious injuries that we should be concerned about for this upcoming season.

“Just checked with our trainers, nothing serious, no injuries that are going to cause any concerns. A couple of ankles, maybe a hamstring here or there, but nothing from an injury standpoint, so that's always great in the spring game,” said Kelly.

And as far as the team’s decision making during the game, coach Kelly is pleased with the players’ organization both offensively and defensively.

“No turnovers. It wasn't sloppy. We had a couple of penalties here and there, but I thought it was disciplined. It was organized. I thought the team knew what they were doing, both on offense and defense and that was pleasing from a head coach's perspective,” said Kelly.