Coach Brian Kelly to remain at Notre Dame through 2021 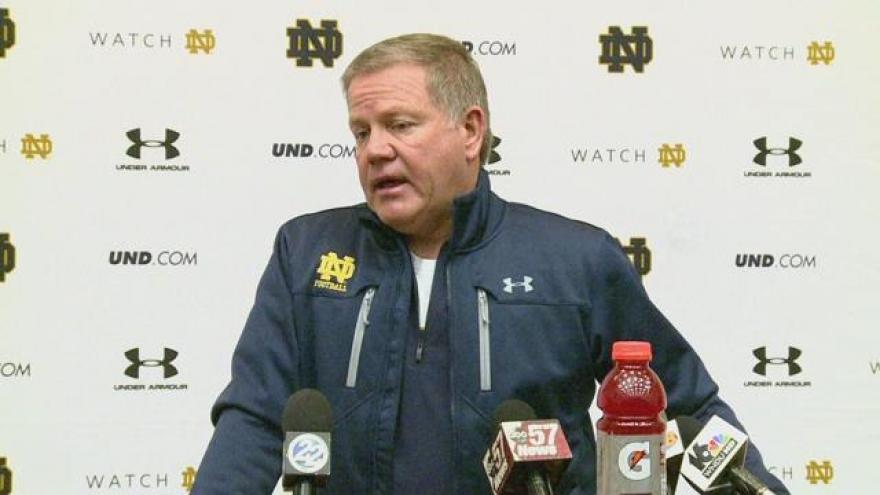 The head of the University of Notre Dame's athletics department announced Friday head football coach Brian Kelly has agreed to stay through the 2021 season.

"In the classroom, in the community and on the playing field, Brian has built the foundation of a great Notre Dame football program--one that reflects this University's values and its unique relationship to the game of football,” said university Vice President and Athletics Director Jack Swarbrick. “I could not be more excited about the future of our football program under Brian's leadership, and I am especially thankful that our student-athletes will continue to have the benefit of that leadership in the years to come."

“I want to thank Father Jenkins (University president Rev. John I. Jenkins, C.S.C.) and the leadership of Notre Dame for their confidence in me,” said Kelly. “I coach football because I believe there are few better avenues for impacting the lives of young men, and I am certain that there is no better place to do that than the University of Notre Dame. During the next six years I look forward to continuing to lead a championship caliber program, but more importantly I look forward to continuing to help the student-athletes I coach to achieve greatness as football players, as students and as men who will make a difference in families, communities and organizations they will someday lead.”

The University of Notre Dame released the following stats about Coach Kelly:
The consensus national coach of the year in 2012 when he led the Irish to a perfect 12-0 regular season, the number-one ranking in the final Bowl Championship Series poll and a berth in the BCS title game, Kelly has built a 55-23 record (.705) in his first six seasons at Notre Dame (2010-15). His most recent team in 2015 won 10 games, ranked as high as fourth in the College Football Playoff poll and qualified for the BattleFrog Fiesta Bowl, one of the prestigious New Year’s Six games.

He owns a 25-year career record of 226-80-2 (.737), has taken each of his first six Irish teams to postseason bowl games (something no other Notre Dame football coach has done) and possesses an overall 16-8 (.667) record in postseason play as a head coach. His 149 victories as a head coach since 2001 are more than all but two active FBS head coaches--Oklahoma’s Bob Stoops and Ohio State's Urban Meyer.

Kelly qualified as the 23rd college coach to reach 200 career victories with at least five years of service or 50 victories at a school that was classified as a major college at the time—and he ranked as the second-youngest and fifth-fastest coach to reach that milestone. He’s the only football coach in school history to lead the Irish to at least eight victories over each of his first six seasons—and the first coach to take Notre Dame to bowl games in six straight years at any stage in his career since Lou Holtz (1987-95).

Kelly ranks seventh among active NCAA FBS coaches in career winning percentage (.737). In 2012 he led Notre Dame to its first undefeated regular season in 24 years (since 1988), and he guided the Irish that year to their highest national ranking (third Associated Press, fourth USA Today) to close a season since 1993 (second in both major polls that year).

He is only the second Irish coach to win 12 games in a season (Holtz also did it in 1988), and he’s the first Notre Dame coach to post six straight years with at least eight wins since Holtz did that in seven consecutive seasons (1987-93). Kelly joins Knute Rockne, Ara Parseghian and Holtz as the only Irish coaches to produce two double-digit win seasons (Kelly in 2012 and 2015).

Since Kelly has been at Notre Dame, the Irish football program three times has ranked first among FBS institutions in NCAA Graduation Success Rate numbers and never has ranked lower than sixth. In federal graduation rates for football Notre Dame has consistently ranked in the top 10 among FBS schools during Kelly’s tenure, while NCAA Academic Progress Rate football numbers have been at least 970 (out of a possible 1,000) in all his years at the University.

Notre Dame in 2014 won the American Football Coaches Association Academic Achievement Award with a 100 percent graduation rate for the freshman football student-athlete class of 2007. In 2012 Kelly oversaw the first program to be ranked number one in the football polls and first in NCAA GSR graduation rates while also playing for the BCS title.

Each of Kelly’s last 10 teams has participated in a bowl game—encompassing each of his six Notre Dame squads, each of his three Cincinnati teams and his final squad at Central Michigan (2006). Every team in his 25-year head coaching tenure has finished .500 or better—other than his first Central Michigan squad (4-7 in 2004).

Notre Dame named Kelly its 29th head football coach on Dec. 10, 2009, awarding him a five-year contract. On Jan. 10, 2012, the University announced it had extended Kelly’s agreement for two seasons through 2016. Kelly received a second extension, this one through the 2017 season, following the 2013 season-opening victory over Temple.
A native of Everett, Massachusetts, Kelly is a 1983 graduate of Assumption College in Worcester, Massachusetts.

He and his wife Francisca (Paqui) are parents of three children—Patrick, Grace and Kenzel.