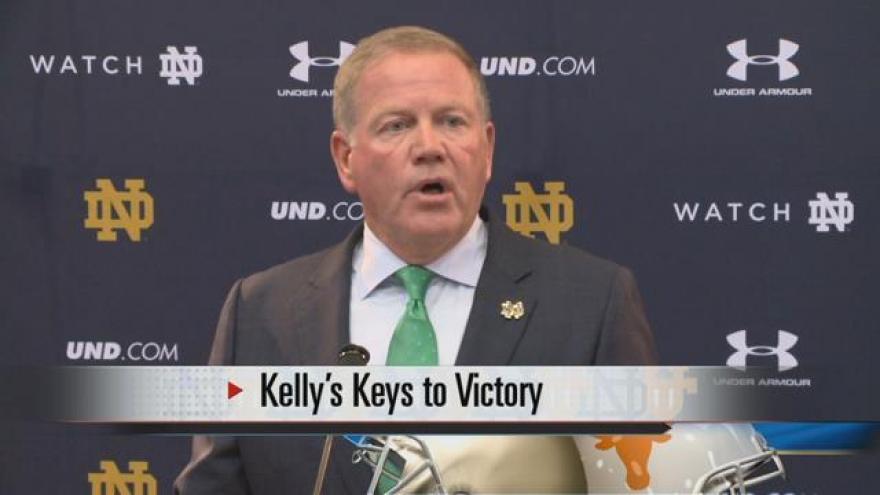 Game day for Notre Dame and Texas under the lights in front of over 100,000 people in Austin, Texas and there’s a lot of pressure on this tenth ranked Irish team, especially after the first upset Saturday of the season where two top 5 teams lost.

By now, most people know that both Notre Dame and Texas will be playing two quarterbacks in this game and neither team will name a starter until just before kickoff and while that is certainly a big story line, Coach Kelly feels there are other factors that will play an even more important role in the outcome of this game.

So here are Kelly's keys to victory:

"I think a lot of attention, a lot of eyes, a lot of national media and local media will be wanting to focus on that, but sometimes when you focus on the quarterbacks, you forget there are a lot of other things going on out there and there's a lot of talented players on both sides that will have to step up and make plays,” said Kelly.

That first key to victory?  Establishing a run game.

Last season, the Irish held D'onta Foreman and Chris Warren to 9 yards on 7 carries and held Texas as a whole to 60 total yards with no touchdowns.

But Kelly says the Longhorns are improved and he knows he has to be prepared for their speed.

"I mean, it's fast. This is going to be North Carolina fast. This is fast, fast tempo. We've worked hard on that to prepare our defense for the kind of tempo they're going to see,” said Kelly.

And offensively, Kelly doesn't want any missteps for the Longhorns to capitalize on.

Kelly says the biggest key to victory could be how his team handles the pressure of a Sunday night game on the road in front of more than 100,000 fans.

"I think what I'm most interested in is how we handle the adversity that we'll face the first time. Certainly there will be some adversity, and how we charge through that and manage it will say a lot about this football team moving forward,” said Kelly.