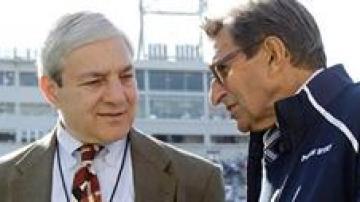 STATE COLLEGE, Pa. -- Penn State football coach Joe Paterno and university president Graham Spanier have been removed from their positions, effective immediately, amid child sexual abuse allegations involving one of Paterno's former assistants, according to the school's board of trustees.

"These decisions were made after careful deliberations and in the best interests of the university as a whole," John P. Surma, vice chairman of Penn State's board of trustees, told reporters.

Paterno, who earlier today announced that he was "absolutely devastated" by the scandal and would retire at the end of the season, will not get to leave on his own terms.

In fact, he will not coach another game, Surma said.

Tom Bradley has been named interim coach for the rest of the season.

The end of the line for Paterno and Spanier came a few hours after the U.S. Department of Education announced it was launching an investigation into whether Penn State University officials mishandled the allegations.

Officials are checking to see if the university failed to comply with the Jeanne Clery Disclosure of Campus Security Policy and Campus Crime Statistics Act (the Clery Act), which requires colleges to disclose reported criminal offenses on campus.

"If these allegations of sexual abuse are true, then this is a horrible tragedy for those young boys," Education Secretary Arne Duncan said in a news release. "If it turns out that some people at the school knew of the abuse and did nothing or covered it up, that makes it even worse. Schools and school officials have a legal and moral responsibility to protect children and young people from violence and abuse."

Spanier apparently had submitted a letter or resignation and the board only needed to accept it, a source told ABC News' Lauren Pearle.

The board held a closed-door meeting this evening and then held a news conference.

The turmoil follows the arrest of former assistant coach Jerry Sandusky, charged with abusing at least eight boys over 15 years.

Athletic director Tim Curly and Vice President for Finance Gary Shultz were charged Tuesday with not reporting the sexual abuse to police and lying to a grand jury under oath during the investigation.

Paterno and Spanier have come under intense pressure this because they were also told of at least one incident, but did not alert police.

"I am absolutely devastated by the developments in this case," Paterno, 84, said in a statement today. "I grieve for the children and their families, and I pray for their comfort and relief."

"This is a tragedy. It is one of the great sorrows of my life. With the benefit of hindsight, I wish I had done more," he said.

Paterno, who has coached the team for 46 years and is the winningest coach in top level college football ever, said it has been his intention to "serve the best interests of this university and the young men who have been entrusted to my care."

"That's why I have decided to announce my retirement effective at the end of this season. At this moment the Board of Trustees should not spend a single minute discussing my status. They have far more important matters to address. I want to make this as easy for them as I possibly can," Paterno said.

The coach had a closed meeting with his team and coaching staff this morning where he reportedly broke down in tears while telling them he was leaving, according to the Associated Press. Players, also choking back tears, gave him a standing ovation as he walked out of the gym, the report said.

Penn State representatives did not have an immediate comment.

Paterno was showered with affection by Penn State students who showed up outside his house Tuesday night.

"I've lived for this place. I've lived for people like you guys and girls," Paterno said when he emerged from his home. "It's hard for me to say how much this means.

"As you know, the kids that were the victims. I think we ought to say a prayer for them," he said.

Sandusky was arrested Saturday and charged with molesting eight boys over 15 years, all of whom he met through his charitable organization, The Second Mile, a group home and outreach program for troubled boys.

The charges stem from a March 2002, incident in which graduate assistant coach Mike McQueary allegedly saw Sandusky sexually assaulting a boy in a locker room shower in the Penn State football department. McQueary told Paterno what he saw, and Paterno in turn told Curly and Shultz. None of the men reported the incident to police.

The Pennsylvania attorney general said Monday that Curly and Shultz were legally required to alert police to the incident, while Paterno was only legally obligated to tell his superiors. But Paterno has come under fire for failing what police called a "moral obligation" to alert them to the crimes.