Coach Kelly finalist for coach of the year 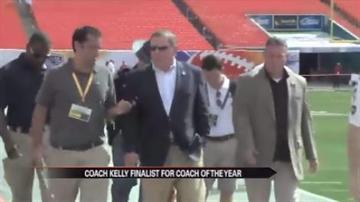 The five finalists were announced for the Bobby Bowden Coach of the Year Award.

They also include Nick Saban from the University Alabama, along with Urban Meyer, Bill Snyder and Kevin Sumlin.

Voting on the award is done by the National Sportscaster and Sportswriters Association.