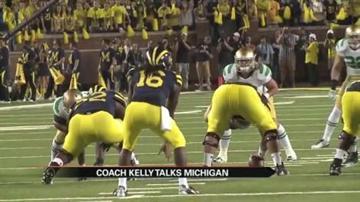 NOTRE DAME, Ind.-- In less than 48 hours, the Fighting Irish will face off against the Michigan Wolverines in what's become the most talked about match-up in college football this week.

Since Michigan Head Coach Brady Hoke has taken reign of the Wolverines in 2011, no team has played at the Big House and gone home with a win, but Notre Dame has gotten close in the past.

Two years ago, Hoke's first year as head coach, the Fighting Irish had Michigan backed into a corner with just over a minute left. Star quarterback Denard Robinson led the Wolverines down the length of the field for a last minute score, crushing those Irish dreams.

"You've got to have a mental toughness to handle the road and you've got to go play to win," Kelly said.

The Big House is one of the largest and loudest stadiums to play in in the country and Kelly says the Irish can handle the pressure.

"We've already talked to them about the atmosphere, and look, we're going up there to win a game. If they're nervous and can't handle it then we probably recruited the wrong guy," Kelly said.

Kickoff isn't until 8 p.m. Saturday, so keeping that laser-sharp game day focus will be more difficult than last week's opener.

"In particular on the road, you do need a maturity as well because there's a lot more down time, it's a night game," Kelly said.

But, Coach Kelly says Michigan is the team that should be feeling the most pressure to win this game, not Notre Dame.

"The pressure's on Michigan, they've got to win at home, you know, I think for us, we're going to go up there swinging," Kelly said.

There's also been a lot of chatter about whether Irish quarterback Tommy Rees can handle the pressure against Michigan this time around after the loss in 2011 at the Big House. Kelly says he is confident Rees is prepared for the showdown. He says Rees is a more proactive player now and is more comfortable with a total of 18 starts under his belt.