Coach Kelly: Nix stepped up despite the flu 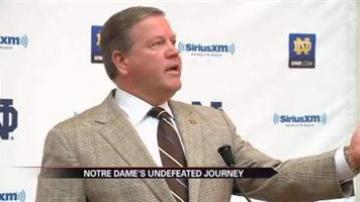 SOUTH BEND, Ind. -- Notre Dame is 9-0 for the first time since 1993 after winning a close game against Pitt.

Notre Dame couldn't have done it without some players overcoming their own fights.

Kelly said the coaching staff decided they'd only use him against Pitt if absolutely necessary.

"He felt okay in pregame. I asked him how he felt, he said, 'Okay'. He said 'he's not himself' is the word that he used," said Kelly.

But when nose guard Kona Schwenke hurt his shoulder, Nix stepped up.

"He wanted to get in there and help his team. It was just a gutsy performance from a kids that was sick all week," said Kelly.

Another Irish player who helped pull off the Irish victory was kicker Kyle Brindza.

He could've let a missed field before the half get inside his head, but he kept the Irish alive in overtime -- tying the game up 23-23.

The next fight is on the road against a 2-7 Boston College team.

"Our players understand again that if they don't play their best they can get beat," said Kelly.

Coach Kelly said Nix is back to normal and feels good.

He still has few more players battling the flu.

But this week -- Kelly said his coaching staff got ahead of it earlier than last week so they're hoping everyone will be ready to go against Boston College on Saturday.