Coach Kelly says spring will come down to competition 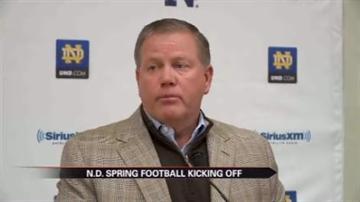 SOUTH BEND, Ind. – Notre Dame Head Football Coach Brian Kelly previewed the kickoff of spring football. The spring roster is minus one quarterback – and has added a basketball player.

"2012, the personality of that team is gone.  We're in the process of not only developing our football players physically and skill wise, but we're developing leaders within our group,” said Kelly.

While the traditions at Notre Dame will stay the same, the Irish will look different.

“We want competition.  Your program is in good shape when there's competition within,” said Kelly.
This spring the Irish will battle for their spot on the depth chart.

And for some--there's extra space open.

Highly anticipated redshirt freshman Gunner Kiel is transferring, but others have jumped on.

Joey Brooks, a basketball player, is leaving his sneakers behind and is giving it a go as a tight end.

"He's willing to do whatever we ask him to do it'll be fun to watch him to go in there and compete,” said Kelly.

This year, Kelly's got all nine coaches back and everyone's ready to get to work.

"It’s a great motivator for your football team and I think the experience you gain from going through that process is invaluable,” said Kelly.