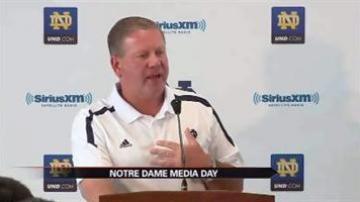 Kelly said so far he’s happy with how Fall Camp has progressed and come Monday, the team will turn their focus to their season opening opponent Navy.

"I like the way things are coming together, but we still got to win football games," said Kelly.

Kelly said camp has focused a lot of 11-on -11 which has helped the coaches get a good look at their quarterback options.

When the decision comes down Kelly said he wants just one guy.

"I don't think I want to play two quarterbacks. I'd rather have one guy make himself known to everybody that he's the starter," said Kelly.

Of course that starter will make their debut in Ireland in the game on Sept. 1.

Kelly said on Thursday that he’s lucky to have such a great support staff to logistically help get the team there, but one of Kelly’s concerns is how the trip might affect the team after the fact.

"What I'm worried about is sleep, loss of sleep, and a cumulative fatigue factor that bites us three, four weeks down the road," he said.

So the Irish have cut back camp some to make sure the players are fresh for the trip.

Besides the quarterback, what captains will lead the team? Kelly said he hopes to make that decision within the next week.

"Yeah, we're going to have captains, and I'll probably make that decision sometime next week as to whether it's going to be captains for the year or game day captains. Getting close to that decision, so we'll have something before very soon," said Kelly.

The Irish will depart for Ireland on Wednesday, Aug. 29.