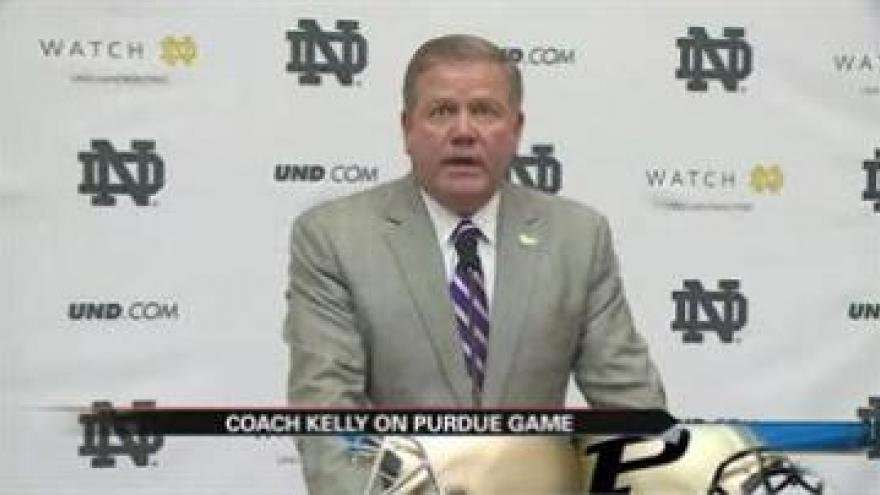 SOUTH BEND, Ind. -- Both Purdue and Notre Dame are going into Saturday's game with one win and one loss for the season. There's no question Notre Dame will fight to add another digit to its win column, especially after last Saturday's loss.

"We need to be smarter and more disciplined," said Coach Kelly last Saturday.

Coach Kelly started the memo-minutes after the 41-30 loss against Michigan.

"We got to be smarter and more disciplined," said Coach Kelly on Tuesday.

It trickled through Tuesday's press conference and remained the slogan during his last media briefing before leaving for Purdue.

"I want my team to be disciplined this weekend," said Coach Kelly on Thursday.

After the Irish were forced out of the big house--- with the first loss in a regular season game since 2011- Kelly said this week boils down to focusing more on tweaking the Irish.

"Purdue is going to ready for Notre Dame. We have no doubt about that and we respect our opponent but look we got to put blinders on and we got to focus on ourselves. We're not a finished product we've got some work to do," said Coach Kelly.

"This is an in-state rival that plays very well against us we just need to look at last year's game," said Kelly.

2012 came down to the wire. The Irish entered the fourth quarter tied at 17-when quarterback Tommy Rees stepped in for starter Everett Golson-and pushed Notre Dame into position for a field goal.

With 7 seconds on the clock, Kyle Brindza zoned in and nailed the 27 yard field goal to win the game.

That's the feeling Kelly wants to have Saturday leaving the stadium.

Because when you don't have to leave your state to play another round of Big Ten football-anything goes.

"When we talk about Indiana schools playing against each other it's going to be on ABC television its going to be a big crowd great atmosphere we're going to have to handle ourselves in a manner that allows us to win the football game down the stretch," said Coach Kelly.

If Notre Dame can hold off Purdue this will be the 6th straight win for the Irish in the series against the Boilermakers.