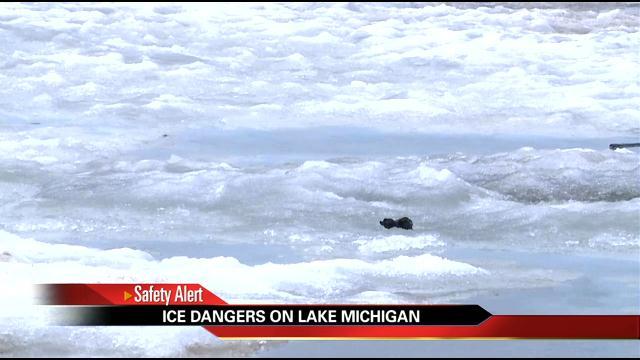 With temperatures warming up, a trip to the beach might be in order for the family, but the Coast Guard says you should avoid walking on the ice.

Despite the warm temperatures there are still big chunks of ice on Lake Michigan.

The Coast Guard says taking a walk on one is a dangerous idea.

“No ice is safe ice. You certainly don't know especially with the weather warming up, you could be walking on what seems to be thick ice and then all of a sudden it gives way,” said Officer Michael Scannell.

The sand formations out on the ice aren't safe to walk on either.

“It's sand. It's not a solid structure. Just like ice,” said Scannell.

Risks of falling through the ice include hypothermia and drowning.

Locals say it's something they see often.

“Both parent and children have been out there on the ice, even when it's getting warmer like today,” said resident Victoria Wagner.

“That's pretty dangerous. You're asking our folks like the Coast Guard to go out and risk their lives to save people who don't use their head about what that ice really does,” said Wagner.

Scannell said to avoid walking on ice formed on any body of water.